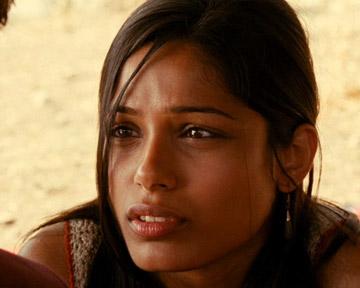 From Academy Award® nominated director Julian Schnabel (The Diving Bell and the Butterfly), and based on the acclaimed semi-autobiographical novel, Miral is the story of a Palestinian girl coming of age amidst the war zone of the Israeli-Arab conflict — unflinchingly told through the perspective of Miral (Freida Pinto, Slumdog Millionaire) herself. Following the death of her troubled mother, Miral’s father (Alexander Siddig) is forced to entrust her to the orphanage of Hind Husseini (Hiam Abbass), a woman whose commitment to peace through education has a profound impact on the maturing young woman as her epic journey to self-esteem and social consciousness proves both harrowing and hopeful. Also starring Willem Dafoe and Vanessa Redgrave. 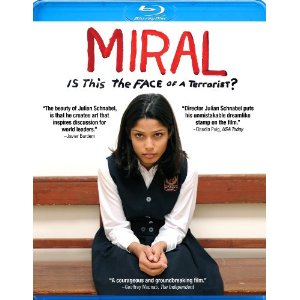 Julian Schnabel is a genuine artist, a true risk-taker. He is a respected painter, a writer, and he even recorded an album. And, true to his genius, he is also a filmmaker, having directed unique, non-commercial, yet critical successes as “Basquiat” (1996), “Before Night Falls” (2000), and “The Diving Bell and the Butterfly” (2007). His most recent film, the passionate and eye-opening “Miral,” follows this special pattern, this time taking a sincere look at the lives of Palestinian women.

The film is based on a true story from a book by Rula Jebreal, and it begins at a party on Christmas day, 1947. It is there that we are introduced to Hind Husseini (the wonderful Hiam Abbass), who unbeknown to us, will be the most important character – the glue, if you will — in the movie. This party, perhaps, will be the last happy one that its guests attended. Schnabel then proceeds to show archival footage of the establishment of a Jewish state in the land of Israel, which would later be referred to as the State of Israel. We are then taken to Jerusalem in 1948, and we find Hind walking on its streets, where she meets a group of homeless children that were displaced due to bombings. She feels sorry for them, takes them home, and eight months later she successfully creates a school for Palestinian children. The director moves forward to 1967, and, as a result of the Six Day War, this time Hind is now limited to the Palestinian sector of East Jerusalem.

After Schnabel introduces us to Hind, we begin meeting other Palestinian women that are victims of racial, political or sexual abuse. One of them is Miral (Freida Pinto), who is raised by her loving father. He tries his best to protect Miral against her surroundings, by sending her to Hind’s school. However, it is difficult to escape reality in Palestine, especially in 1987, during the first Intifada, where Miral sees firsthand the treatment of the Palestinians by the Israelis. Miral, as you can imagine, will have to make some serious choices in order to survive a harsh life under occupation.
Movie Quality: 9/10

The print is presented in 1080p/AVC MPEG-4 with a 2:40:1 aspect ratio. The print looks very good throughout without any apparent issues. Colors are vibrant and carry pop which brings out the fine details. The detailed scenes stand out very well. Blacks are deep. I found the print to be crystal clear with no artifacts or print damage. The darker look and feel of the film looks great with the appropriate lighting making this timepiece film standout.
Print Quality: 9/10

The audio is presented in a DTS-HD MA l0ssless 5.1 mix. The 5.1 DTS-HD audio isn’t quite as strong, but it’s well balanced and robust. Miral is presented in English, with the occasional snippets of Arabic and Hebrew, and all of it is nice and clear. Schnabel uses a heavy amount of popular music for the score, including two Tom Waits songs as end credit music; all of it very effective.
Print Quality: 9/10

This is a true story, oh what a story this is. A story of perseverance , struggle and success. The story of a young woman who is an example of bravery, self confidence, beauty and reseliance.
Overall Rating: 8/10