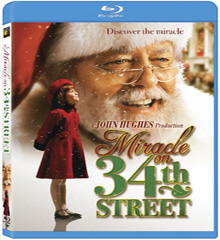 Anyone skeptical of updated retreads of Christmas movie classics may be genuinely surprised by this 1994 version of Miracle on 34th Street. Based on the 1947 holiday classic, this new Miracle sticks close to the original’s story, though it offers more contemporary, crisper pacing and a tone curiously more reflective–even sorrowful–than before. Richard Attenborough is charming and twinkly as Kris Kringle, the part that won Edmund Gwenn an Oscar. Mara Wilson is the little New York City girl who doesn’t believe in Santa Claus until Kris persuades her otherwise. Elizabeth Perkins is her hardened mother, and Dylan McDermott plays the handsome lawyer next door who defends Kris during an insanity hearing. While screenwriter John Hughes has toughened up the dialogue a bit, and McDermott’s intensity looks like a dry run for his then- future role on television’s The Practice, this Miracle is as persuasively sweet as the one previous.

You’ll fall in love with the magic of Christmas all over again with “Miracle on 34th Street,” the modern day remake of the 1947 classic film about a young girl who gets the ultimate Christmas wish when she meets the real Santa Claus. With an extremely likeable cast, a faithful adaptation of the original material, and holiday spirit and cheerful execution to boot, this is one holiday film you won’t want to miss.

Set in our time, the film opens with the Cole’s Thanksgiving Day Parade, as Dorey Walker (Elizabeth Perkins) comes upon a severely drunken actor who has been employed to play Santa Claus in the parade’s send-off. Her problems are solved when she runs across the delightful Kris (Richard Attenborough), who bears a striking resemblance to the real deal. She convinces him to replace the now-inept actor, and the parade goes off with nary a fault.

Kris’s authenticity touches many of those who come in contact with him, including Dorey’s young daughter, Susan (Mara Wilson), who is a non-believer. Kris, along with family friend Bryan Bedford (Dylan McDermott), sets out to make a believer out of Susan, all the while charming the children who sit in his lap at the department store, and causing a buzz of good publicity for the department store.

All of this is done with a great deal of charm and holiday spirit. The movie is one of the better modern Christmas films I’ve had the pleasure of seeing. The fact that it is based on a classic is of no importance, because it keeps the spirit and wisdom of that previous film and instills into a setting we can better relate to.

It keeps in touch with the original’s many touching moments. One that comes to mind is Kris’s conversation with a deaf little girl, a truly touching moment that rides the movie’s emotional carriage home. It’s scenes like this that give the movie such an uplifting sense of direction and spirit, along with the central message, as Kris so magnificently puts it, that “if you can’t accept anything on faith, then you’re doomed to a life dominated by doubt.”
Movie Quality: 9/10

The print is presented in 1080p/AVC MPEG-4 with a 1.85:1 aspect ratio. Colors are washed out throughout the film. There were multiple scenes later in the film where colors came out looking a bit deeper than the first part of the film. Blacks are also soft which hurts the print a tad bit. Details are also fairly good even though colors and blacks don’t jump off of the screen. A lot of this is due to the original source of the way it was filmed. Grain is very subtle throughout the entire print. I can not complain here as the film on Blu-ray looks better than the last two DVD releases.
Video Quality: 7/10

The audio is presented in DTS-HD MA lossless 5.1 mix. The audio experience is actually fairly pleasant for a film that is more about the dialogue. The film’s soundtrack does take advantage of the rears in the soundfield. I was impressed with the musical score in the soundfield as I felt immersed. Dialogue comes through the center very clear with no apparent issues.
Audio Quality: 8/10

‘Miracle on 34th Street’ the 1994 remake is just as good as the original and fans will not be disappointed. On Blu-ray the video and audio is the best this film has looked on home video. There are no special features which is a disappointment. If you are a fan of this film or even the original, I highly recommend this as a purchase.
Overall Rating: 9/10