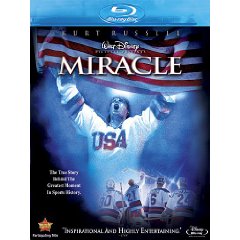 The miracle about Miracle is that it gets so many details right in telling its 24-year-old story about the historic victory of the U.S. hockey team at the 1980 Olympic Games. It’s typical for Hollywood to compromise such period details as hairstyles and fashion when catering to a contemporary audience, but Miracle looks and feels right in every detail, capturing the downbeat mood of post-Watergate America while showing how obsessively determined Minnesota hockey coach Herb Brooks (Kurt Russell) managed to assemble a once-in-a-lifetime team and whip them into a victorious frenzy over their Soviet champion opponents. With sharp support from Patricia Clarkson (as Brooks’s wife) and Noah Emmerich (as his long-suffering assistant), Russell grounds the film with a well-balanced combination of aloofness, intimidation, and closely guarded strategy. No doubt the real Brooks (who died in a car accident shortly after filming completed) would have approved. Thanks to director Gavin O’Connor (Tumbleweeds) and the producers of the similarly laudable sports films Remember the Titans and The Rookie, Miracle brings plenty of heart–and historical accuracy–to an old, familiar formula.

The film does a fantastic job of recreating the social climate of the late ’70’s and early ’80’s: the aftermath of Vietnam and Watergate, the disco craze, oil embargos, and unrest in the Middle East (i.e. the Iranian Revolution and hostage crisis). President Carter gave his infamous “Crisis of Confidence,” a.k.a. ‘malaise,’ speech in which he pointed the finger at the American public while doing nothing to provide inspiring or effective leadership. He was right, though: America was having a crisis of confidence. We needed a morale boost.

And along came the 1980 U.S. Olympic hockey team. It was a team of true amateurs unlike the Soviet team that had won the gold medal in the previous four Olympics. The Soviets were so well-funded by their government that they were able to focus entirely on their hockey game and were so good that they even beat a team of NHL all-stars. And yet our amateurs beat our (at that time) arch-enemy’s hockey juggernaut and gave the entire country a confidence and morale boost. The fact that they won the gold medal by beating Finland was just icing on the cake; all that really mattered was that they had beaten the Soviets.

It’s great to get the background behind the players and their coach, Herb Brooks, in this movie. The movie contains many sports cliches: the diverse group of players who need to learn to function as a team, the hard-nosed coach who teaches them, and the underdog comes out on top cliches are all here. None of that matters, though, because it was all true. If you were alive and old enough to remember this time, then this movie will warm your heart as much as the team’s victory did in 1980. If you weren’t alive or old enough to remember, then watch and see what Americans did (and still can do) when we set our minds on achieving a goal even as everything around us seems to be falling apart. Sports truly can be a metaphor for life, so let’s all learn a lesson from this team.
Movie Content: 9.5/10

The print is presented in 1080p/AVC MPEG-4 with a 2.40:1 aspect ratio. he print looks good on Blu-ray having seen this film plenty of times on DVD and television over the years. Colors look saturated holding a consistent pop throughout the film. Blacks are deep providing some very good details. The print is pristine from any blemishes providing a rather clean image.
Video Quality: 9/10

The audio is presented in DTS-HD MA lossless 5.1 mix. This is an atmospheric mix when on the ice with the skates, hockey sticks hitting the puck, the crowd cheering on, and various sound effects during the game pull you in as if you are sitting at the game. Dialogue is clear and crisp. Dialogue is clean and crisp through the center channel.
Audio Quality: 8.5/10

All special features are presented in standard definition. All the extras were ported over from the previous release DVD.

Superb in its portrayal of perhaps the greatest sporting event of all time in every aspect – from acting to wardrobe to the game on the ice, “Miracle” is an absolute joy to watch. The video and audio are excellent in high definition on Blu-ray. For fans of the film, I can’t recommend this film enough and for those looking for a feel good film this is for you.
Overall Rating: 8.5/10