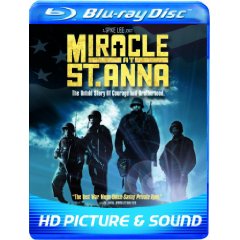 ‘Miracle At St. Anna’ is based on a true story about the “Buffalo Soldiers” division of the Army during World War II. The “Buffalo Soldiers” division was an all-black regime used by the white officers to send in first into battle. When you think back to this, it just feel so inhumane that not so many years ago how our society was so into racism. Racism still exists today, but it was so much more in your face at the turn of the century. Writer/Director Spike Lee takes us through a wild emotional ride in this film. The film had a limited release worldwide as it grossed a total of $9.1 million dollars.

Spike Lee tries for his own version of ‘Saving Private Ryan’ which in some ways he succeeds and others fails due to the holes in the story. The film opens in 1983 with such a riveting scene, that it sends a chill down your spine. An elderly man is sitting behind a window at the post office taking people’s mail. When a man comes walking up to him, he pulls out a Luger shooting him into the chest. Then the news comes out that a reporter (Joseph Gordon-Levitt) finds a statue head in the post office worker’s closet, which ends up making huge news. They label the man the “Marble Head Murderer”.

We jump back in time to 1944 as we follow four soldiers that have become lost as they have separated from the rest of the unit in Italy. The soldiers are trying to make their way through an Italian river so they can cross into Germany. We have a battle that the four soldiers get themselves stuck in, but are lucky to make it out alive. This is when we see some of the battle sequences of the film; they look good, almost rivaling some of the bigger budget ones in film history.

I will not speak anymore about the story as there are many spoilers that will ruin the story. I found the story to be engaging throughout, even though there are some plot holes and elements that stretch reality. The film is about 160 minutes long, while the film doesn’t drag, it does feel a tad bit long for the material. I can see where this could be a problem for people that have a very low attention span. The film could have used some editing as it would have really helped trimming some of the fat. It is the moments that are griping to the viewer that helps get you through this long ride. It also helps that all of the performances are top notch from our four heroes all the way down to some of the smaller roles in the film.
Movie Content: 4/5 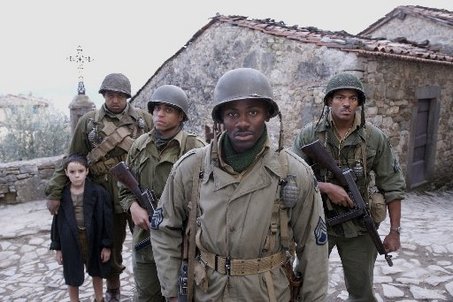 The print is presented in 1080p/AVC MPEG-4 codec in 2.35:1 aspect ratio. This print is rather unique as it changes during the scenes in 1983 to look clean and pristine, while during the scenes of World War II where the print is gritty and a tinted/muted color palette. There is also grain that has been added to bring out the grittiness of the era. Details during these scenes can vary where some scenes look detailed and many more do not. Black colors are solid providing excellent depth. I was rather happy with the filtering used here with the print to distinguish the World War II era from the current time period.
Print Quality: 4.5/5

The audio is presented in DTS-HD MA lossless 5.1 mix. This is a film that is mixed between a few battle scenes and very dialogue driven. Yet this is not an overly aggressive sound mix. Dialogue is centered properly through the center channel providing a nice deep clarity. During dialogue driven films, this is very important on the depth as I have seen with a few DTS-HD mixes lacking dialogue depth. There are some decent dynamics during the battle sequences which make you feel like you’re in the middle of the gunfire and explosions. Bullets will whiz by in the rears providing nice panning effects. Bass is just right providing the appropriate amount of bang when an explosion occurs.
Audio Quality: 4/5 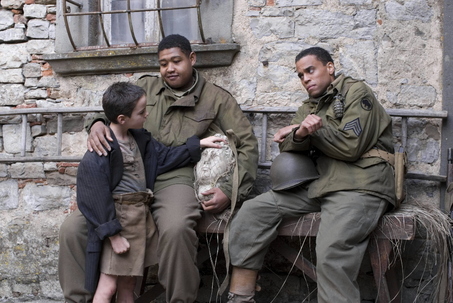 Special features are on the lighter side for the film, yet they are all presented in high definition.

While there are a few issues with the plot holes and length of the film, I enjoyed ‘Miracle of St. Anna’ from start to finish. There was never a dull moment so that helped keep the film from dragging, but it still could have used some more time in the editing room. On Blu-ray, the film looks and sounds fantastic. This film may turn off a few people due to the racial tones. I highly recommend this as a rental at the least, it is well worth viewing.
Overall Rating: 4/5