Posted in Videogame Reviews by beyondmediaonline on 03 September 2008 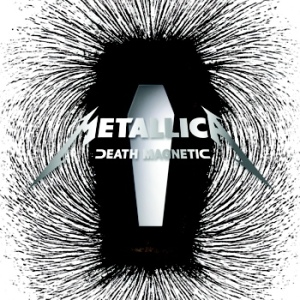 I had the opportunity to listen to ‘Death Magnetic’ a few times tonight, and these are my song by song impressions. ‘Death Magnetic’ will give ‘And Justice For All’ a run for its money in terms of complexity.

1-That Was Just Your Life – if any song on this album comes close to being the missing link between ‘AJFA’ and ‘TBA’ it is this song. The song compares a lot to ‘Blackened’. Hetfield blasts through these vocals and the guy is on fire.

2-The End of the Line – the intro riff kicks major ass and this is Hetfield snarling at his best. This is the intro riff from ‘The New Song’ that they played at concerts a few years back. Reminds me a bit of Fuel in a few places. Hammett continues to blast away as the riffs and solos are insane on this song and goes to show what has been missing the last few years. Things slowdown a bit the last part of the song, but then James will tell you why “The Slave Becomes the Master.” At this point, the shit hits the fan again and the song goes into high gear.

3-Broken, Beat & Scarred – the second best riff of the whole album, and with a few more listens……it may top TEOTL’s intro. Hetfield’s voice is incredible on this song.

4-The Day That Never Comes – We’ve heard this one already, no reason to bother going over how good of a song that it is, but after hearing some of the other tracks this one takes a backseat.

5-All Nightmare Long – starts off rather slow and builds up into a thrash frenzy and then has that signature ‘AJFA’ multiple changes in pace and then hits you back again. This damn song is so damn evil and boy are the headbangers going to have a good time with this one. This is literally 8 minutes of blow your mind metal.

6-Cyanide – sounds so much better in studio than live.

7-Unforgiven III – some may dislike the piano at the beginning, but it is a very nice melody. After the 1 minute mark it picks up getting a bit more harder. Very different from the other two Unforgiven’s. For the Load haters, this song does feel like it came right out of that era but with heavier guitar work and riffs. The last 2 minutes Kirk really goes nuts with the solo. James singing right into Kirk’s solo is the highlight. This is not my favorite Unforgiven…………..but should have been titled something different.

8-The Judas Kiss – Judas Kiss is heavy as hell and the beginning is just kick ass. Very pumping and gut wrenching song which has that Load flavor, but heavy as hell. James singing is some of the best yet on this song, especially when all the instruments drop out for a few seconds.

9-Suicide and Redemption – How much I miss the Metallica instrumentals, but this one is nowhere near the caliber of previous instrumentals. It’s a good instrumental, but felt a bit basic to me.

10-My Apocalypse – We’ve heard this song already and my favorite of the three that were released by Metallica. Very Slayer like sounding throughout the song.

For those in doubt about this album, give it a chance. Now I can’t wait for 9/12 to rush out to the store and
pick up this album. I hope that they continue to write more music with this style, because this Metallica is what some of the older fans will be happy with. St. Anger placed a bitter taste in many fans mouths, I am glad to report that ‘Death Magnetic’ will make that bitter taste disappear. Look for  a much more comprehensive review within the week.

I am a little bit saddened that some of these other songs didn’t get the radio play instead of ‘The Day that Never Comes’ because there are some total badass tunes on Death Magnetic. To me, this album was like an apology to Kirk for no solos in St. Anger, the guy goes to town……………his solos drive this album.