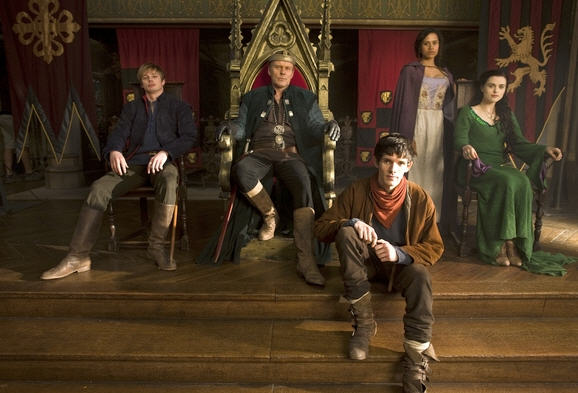 Merlin is back with even more magic, adventure and romance as the young wizard struggles to protect Prince Arthur in the perilous world of Camelot. While battling deadly assassins, mystical monsters and the most powerful sorcerers Camelot has ever seen, Merlin must work harder than ever to conceal his unique abilities, as King Uther redoubles his war against magic. And Merlin isn’t the only one whose destiny calls—Lady Morgana , Uther’s ward, discovers dangerous secrets she dare not reveal; Lancelot returns, changing everything for both Gwen and Arthur; and King Uther falls in love, little knowing that the charming Lady Catrina is secretly a hideous troll. And as Arthur continues on his path from arrogant prince to the noble and just King Arthur of legend, we see the return of the one prophesied to kill him—the mysterious druid boy, Mordred. Featuring exciting new villains, white-knuckle stunt sequences, and spectacular CGI monsters, Merlin: Season Two is more thrilling than ever. 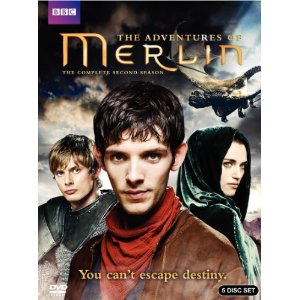 An outtake on a younger version of Merlin and Arthur as young men
in Camelot. Each story gets better and more interesting then previous episodes as the seasons progress. Season One we were introduced to the characters and fell in love with them, Season Two we got to know them and loved them even more. The actors were very well picked for their parts and work well with each other. The show and cast of Merlin BBC series staring, ‘Collin Morgan’ as (Merlin) ‘Bradley James’ as (Prince Arthur Pendragon) ‘Anthony Head’ as (King Uther Pendragon) ‘Katie Mcgrath’ as (Morgana) ‘Richard Wilson’ as (Gaius) and ‘Angel Coulby’ as (Guinevere}

Merlin is once again taken on the difficult task of keeping Prince Arthur and Camelot safe, while trying to keep his powers a secret. With many more monsters and other adversaries, Merlin and Arthur face even greater obstacles than before. Meanwhile, Lady Morgana is going through changes, and ultimately makes decisions that will lead her down the path of evil.

Colin Morgan returns as the title character Merlin. Growing from the awkward geeky boy, to a more confident young man in this season. Arthur, played by Bradley James, goes through changes himself, as he becomes stronger and more humble. Arthur also experiences the first hint of love blossoming with Guinevere (Angel Coulby). And Morgana (Katie McGrath) begins to show her darker side. Watching these characters develop is a highlight of the season. While I’m not a fan of Angel Coulby’s Guinevere, I thoroughly enjoy the rest of the cast of characters and their interpretations.

Season 2 continues quite compellingly from the first. It contains some of my favorite episodes from the whole show, introduces a badass female villain, develops some important character relationships (hello, whiplash-inducing epic romances!), and ends with a breathlessly-awesome finale.
Overall Rating: 7/10