Posted in Blu-ray Reviews by George Theofanopoulos on 21 May 2012
When SSgt. Kyle Vogel leaves a handwritten letter on the seat of his car, grabs a pistol and steps into a Minnesota forest, we wonder who he is and what he’s about to do. Flash back a few months as Vogel lies wounded in a hospital near Anbar Province, Iraq. The night before he’s due to return to combat, his doctor, Lt. Kelly Tripp, presses him on why he’s so obsessed with collecting battle souvenirs. Kyle proceeds to tell her what happened on Memorial Day, 1993, when, as a 13-year old boy, he discovered his Grandpa Bud’s WWII footlocker. Though reluctant to talk about the war, Bud, who served with the 82nd Airborne, strikes a deal with Kyle: “Pick any three objects, and I’ll tell you the story behind each one.” As we see Bud’s WWII tales from Europe, we also see how Kyle’s experiences in Iraq have paralleled them-and how that day on the porch will affect how he ultimately deals with the losses, regrets and moral dilemmas that unite all soldiers across wars and generations. 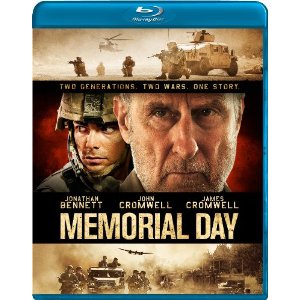 The movie has an over simplistic made for TV air about it, which is part of the appeal. Jonathan Bennett (a drama major) plays SSGT. Kyle Vogel an American soldier fighting migraines and insurgents in Iraq. When he gets injured he is in a hospital where he tells Lt. Tripp (Emily Fradenburgh) a story that happened when he was 13. While forced to play “Hide and Seek” by his grandfather (James Cromwell) he comes across his WWII chest. His grandfather, on the onset of dementia tells him his painful stories about WWII…how he survived suicide missions from Montgomery and met some light combat in Belgium during the Battle of the Bulge.

I had some mixed feelings about the film. It is designed to get you all teary eyed, yet when a vet breaks down over a comrade who was killed nearly 50 years previous, I have to raise an eyebrow. I liked how they kept Memorial Day a private family affair and not a grandstanding commercialized flag waving day.

The movie is simple and doesn’t require a lot of thinking. The message doesn’t relate to the politics of war, or if war is just or not. That is for each individual to debate and decide. The message is, if you wear the uniform of your country, you do the best you can. It is what it is.
Movie Quality: 8.5/10

The print is presented in 1080p/AVC MPEG-4 with a 2:40:1 aspect ratio. While the content of the film can be hit or miss depending on the viewer, the video department does not disappoint at all. Black levels are strong throughout the film as there are a lot of darker scenes. Black levels come off looking rather inky. Color is vibrant and bold in this transfer.
Print Quality: 9/10

The audio is presented in a DTS-HD MA lossless 5.1 mix. Sorting a beautiful DTS-HD Master Audio 5.1 surround soundtrack, Memorial explodes onto blu-ray just in time for the holiday. The movie comes to life with its action scenes of car chases, one on one combat, to simple dialogue. No clouding in any scene nor is any dialogue muffled by music or drowned out by action sequences. Audiophiles will be happy with this mix.
Print Quality: 9/10

I highly recommend this movie and is in my top 10 of movies released this year. Overall, a must see movie that will leave you choked up at the end.
Overall Rating: 8/10