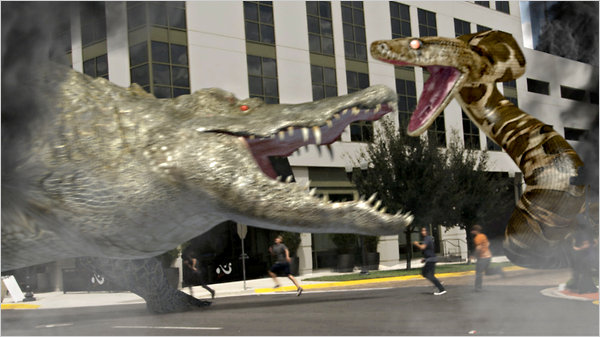 It’s a battle of the beasts from the director of Pet Sematary that’ll rock your world when two titanic terrors face off along with a pair of ‘80s pop icons! After doctor and activist Nikki Riley (Debbie Gibson) accidentally unleashes a python into the Everglades, rival doctor Terry O’Hara (Tiffany) is tasked with finding an expert reptile hunter—and when her boyfriend dies in the process, she resorts to extreme measures to create genetically enlarged gators to stop the slithering menace. Soon the swamp is a huge, scaly battleground between colossal gators and pythons — with a charity ball of potential human snacks in their path! Don’t miss this mammoth spectacle of teen queens and man-eating monsters in a gargantuan duel to the death! 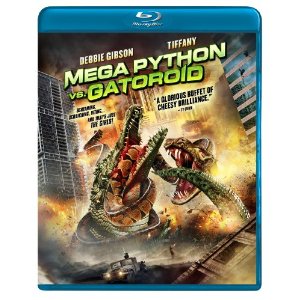 The staple of their lineup are my favorite echoes from the 50’s. The old B-movie classics with the rubber monsters (replaced now with CGI) and the high body counts. The hokey plots, all the works. In this case, it’s two 80’s pop princesses that go at it in a catfight pretty much through the whole movie.

This one has all the bells and whistles with hokey CGI monsters. Giant mutated snakes start things out Later on, giant alligators enter the fray. Before you know it, they’re eating everyone in sight and end up attacking Miami. It’s up to our heroes to lure them all out of the city and to this old quarry to blow them up and be done with it.

With plot holes galore and a body count to rival any war movie, let’s just say that there aren’t many survivors. In the end though, I was left with a big grin on my face anyway. It’s unusual considering the ending, but it was the type of ending that actually worked this time. A Martinez stood out as an excellent third lead with the two girls. He had to show some acting chops to keep a grin off his face and look serious..
Movie Quality: 6/10

The print is presented in 1080p/AVC MPEG-4 with a 2:40:1 aspect ratio. The print is rather inconsistent in certain areas. Colors are de-saturated throughout the entire presentation. The lighting was a bit too bright in many scenes which ended up making the image seem like there was a sun in the background. Black levels are deep and inky. Flesh tones weren’t accurate and looked a tad blah. Details aren’t the best that I have seen in a high definition presentation. There is grain and noise throughout the presentation of varying degrees. This tends to become distracting to the viewer.
Print Quality: 7/10

The audio is presented in a DTS-HD MA l0ssless 5.1 mix. If there is one redeeming element for this disc, it has to do with the audio presentation. From the dialogue pieces and the effects in the soundfield, the audio is top notch. This is one aggressive mix during the action sequences providing a nice dynamic range and excellent panning. The sound makes you feel as if you are a part of the action and sitting right in the thick of things. Dialogue was clean and clear through the center channel. I found this mix to be well balanced with no point during the film did I have to use my remote to adjust the volume.
Print Quality: 8/10

Not good if you actually want a monster movie, but you’ll probably love just because of the two main characters who hate each other. Should really be called “Debbie Gibson vs. Tiffany”.
Overall Rating: 6/10