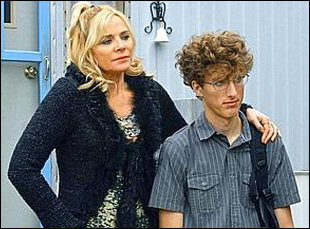 In this irreverent comedy, awkward teenager Tobe (Dustin Ingram) sets off on a road trip to meet Monica Velour (Kim Cattrall), his favorite ’80s porn star, at a rare live appearance hundreds of miles away. Instead of the glamorous sexpot portrayed on film, he finds a 49-year-old single mom living in a trailer in rural Indiana, performing at seedy strip clubs to make ends meet. A starry-eyed Tobe, still captivated by his crush, befriends Monica, further complicating her difficult life. Kim Cattrall gives a career-defining performance in this offbeat love story that appeals to the dreamer — and the nerd — in all of us. 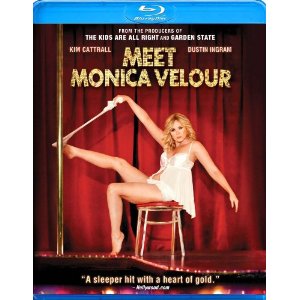 This is basically a charming little “coming of age” indie movie. I found it fun. Kim Cattrall’s star turn is quite good, high-quality acting, and the young hero is believable and effective. Brian Dennehy gives a solid if underbilled performance as the young nerd’s grandfather, as well.

The makers created some “Monica Velour” adult features from the pre-video age that will amuse anyone who remembers that era – they obviously had a lot of fun inventing period products. I enjoyed this aspect of the movie, but wish they had given Annie Sprinkle or Kay Parker or someone a cameo — that would have been great!

Despite dealing with adult themes and sex work, this is not a very salacious movie. There are a few quick glimpses of partial nudity and some explicit language, but 90+% of this movie is PG or purer. There’s more smuttiness in any teen-age slob movie, these days. You’d have to be exceptionally prudish to be offended by anything here.

This film is adult in the best sense – it avoids cliche (mostly) and takes a thoughtful, reality-based approach to age and our world. It’s nothing heavy or Kosmic, but a it’s warm, hopeful, and interesting little movie. You could do worse.
Movie Quality: 7/10

The print is presented in 1080p/AVC MPEG-4 with a 2:40:1 aspect ratio. The print looks very good throughout without any apparent issues. Colors are vibrant and carry pop which brings out the fine details. The detailed scenes stand out very well. Blacks are deep. I found the print to be crystal clear with no artifacts or print damage. The darker look and feel of the film looks great with the appropriate lighting making this timepiece film standout.
Print Quality: 9/10

The audio is presented in a Dolby TrueHD 5.1 mix. The 5.1 Dolby TrueHD audio isn’t quite as strong, but it’s well balanced and robust. This is a dialogue driven film, so this is a front heavy experience. The dialogue was clear and crisp with no apparent issues. The mix is well balanced with the low usage of the surrounds. The rears do get some use with the soundtrack, but do not offer the excellent depth. I would say that this mix was sufficient enough for this type of film.
Print Quality: 9/10

If Napolean met the Julianna Moore character from “Boogie Nights” you would have this movie. I will have to say the Kim Cattrall is the perfect choice for this movie and while not being the total opposite of Samantha she is more of a burnt out version of that character.
Overall Rating: 6/10