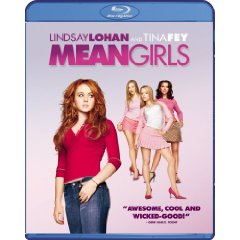 Raised in the african bush country by her zoologist parents cady thinks she knows all about survival of the fittest. But the law of the jungle takes on a whole new meaning when the home-schooled 15-year-old enters high school & falls for the ex-boyfriend of the schools most popular girl.

Cady (Lindsay Lohan) is initially befriended by two of the school’s outcasts, Damian (Daniel Franzese) and Janis Ian (Lizzy Caplan) who give Cady the lowdown of the different cliques in the school. They warn Cady about the most harmful of all the groups, The Plastics, a group of high maintenance girls who because of their beauty are the most popular and most hated girls in the school. Janis had been burned by the Plastic’s Queen Bee, Regina George (Rachel McAdams) a few years ago and Janis wants revenge. Cady might have been raised in the wilds of Africa, but she is intelligent and attractive and soon The Plastics seek to initiate her into their group. Cady isn’t very happy with the idea at first, but Janis thinks it’s brilliant because Cady can be a spy for the cause. Things start out alright but after seeing Regina smooching the boy she likes, Cady begins to hatch a plan of revenge of her own. The fun begins for the girls and the rest of the students.

The entire cast is truly up to the challenge, not just scene stealers Lohan and McAdams. Lizzy Caplan and Daniel Franzese are hilarious as Janis and Damian while Tina Fey is affective as Cady’s teacher Ms. Norbury. To me though, one of the best supporting characters is Gretchen Wieners, played by Lacey Chabert. She has some of the best one-liners in the film and Lacey works wonders with creating a likable air-head with layers unlike the average stereotypical dumb girl.

Tim Meadows works as well as he can with his character but he’s not given much to work with so he comes off a little forced at times as if he’s trying to make a big statement knowing he won’t have many opportunities and it doesn’t quite work as well as he’d like it to. Amy Poehler on the other hand uses her few minutes to work her comedic brilliance and makes a lasting impression.
Movie Content: 9.5/10

The print is presented in 1080p/AVC MPEG-4 with a 2.35:1 aspect ratio. Not having seen this film previously on DVD, the image is fairly good. Colors are vivid and bright offering a nice pop that wasn’t expected. There is some softness throughout the print, but nothing that hurts the print. Sharpness and details are also very good, with inky looking blacks. A good example of details is to take a look at the bands uniforms, the textures looked insanely detailed. There is some apparent grain throughout the film, but it is not overly distracting. For fans of the film, you will not be disappointed.
Print Quality: 9/10

The audio is presented in Dolby TrueHD 5.1 mix. ‘Mean Girls’ is a dialogue driven film, so this is a front heavy experience. The dialogue was clear and crisp with no apparent issues. The mix is well balanced with the low usage of the surrounds. The rears do get some use with the soundtrack, but do not offer the excellent depth. I would say that this mix was sufficient enough for this type of film.
Audio Quality: 8.5/10

In what I originally thought was going to be a terrible film, actually turned out to be an excellent comedy. Thanks goes to a friend from another site that reviews films for talking about this film telling me it is highly recommended. This is a film that in some regard should not be taken seriously, but there are a lot of scenes and instances where certain situations like these depicted here do happen on a daily basis to high school teens. I highly recommend this film as a purchase for fans and even those looking for a comedy with very good replay value.
Overall Rating: 9/10