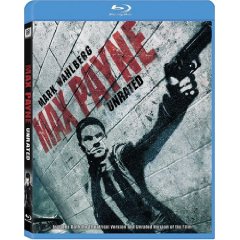 With never having seen ‘Max Payne’ in the theaters, I was looking very forward to its release on Blu-ray. Having played both ‘Max Payne’ videogames on the XBOX this is one chilling tale of deceit, corruption, and balls to the wall action. It was like the film noir genre was ripped right out of Hollywood and brought to the gaming world. Both videogames were very successful on the Playstation 2 and XBOX formats. What made this even more interesting was that ‘Max Payne’ was one of the first games to actually institute “bullet time”. With the gaming world set a buzz, Hollywood catches wind of this little gem making waves in the gaming world. The film would be a success at the box office with a worldwide total gross of $84 million dollars.

‘Max Payne’ was panned very harshly by the critics, which I believe many of these critics just did not understand this film. Due to the movie being based off of a game, it was enough for them to not give it the kudos that it deserves. The story of ‘Max Payne’ begins in New York City with detective Max Payne (Mark Wahlberg) investigating the murder of his wife Michelle (Marianthi Evans), and daughter. Max is hell bent on catching the murderer that killed his family. Max’s friend BB Hensley (Beau Bridges) is the head of security for the pharmaceutical company that his wife worked for before her death.

With the help of a snitch, Trevor (Andrew Friedman) he is lead down the path to help him finding the murderer. Things do not go as he had hoped when the trail leads to a dead end. Max finds his way back to Trevor, only to meet Natasha Sax (Olga Kurylenko) and Mona Sax (Mila Kunis). Max notices that Natasha has a tattoo that was similar to one of the thugs that he met earlier in a bathroom at the train station.

Natasha finds an interest in Max so she begins her game of seduction. After an evening of Natasha working on her plan, the next morning, Natasha is found dead. It becomes even worse for Max, that she had his wallet with her at the time of death. With evidence next to a dead body proving that it could be Max that was the killer. His partner Alex Balder (Donal Logue) is put on the case, which leads to another web of intrigue involving Alex.

We learn later that Natasha’s tattoo is based off of a Valkyrie from Norse mythology. It means that it is protection when in battle. The web of mystery gets even deeper as the film progresses. The story follows the games fairly closely with many changes made to fit Hollywood. I was entertained from start to finish, and pulled me in as I was a huge fan of both games. For fans of the game series, you will enjoy ‘Max Payne’ very much. The performances were also good with a cast of talent that was into their roles. Mark Wahlberg and Mila Kunis were both excellent with some good chemistry between the two. A little unknown fact is that Kunis is a life long gamer, so when this role was made available she jumped on the chance.
Movie Content: 4.5/5 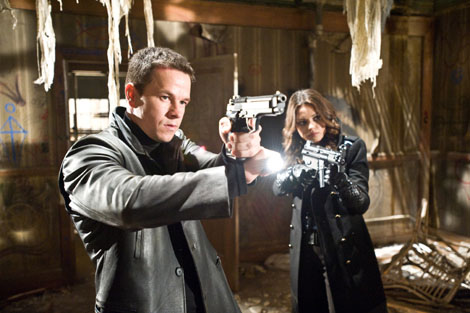 The print is presented in 1080p/AVS MPEG-4 with a 2.35:1 aspect ratio. This is one dark film that jumps out of the ‘Max Payne’ games and onto a Blu-ray disc. This is a very stylized film with blue tints and various dark colors. The color palette varies from strong, lush, and bright to dull looking. The reason is due to the film’s nature, certain colors such as reds stand out the most. Black levels are deep with an ink like look. Details are excellent providing various sense of depth. Scenes up close and when the camera pans away show provide stunning details. This print pops off of the screen giving it a 3-D look and feel. This is a great example of how great films in this genre can look if done right.
Video Quality: 4.5/5

The audio is presented in DTS-HD MA lossless 5.1 mix. This is one film that takes complete advantage of the lossless sound mix. If you thought that the ‘Hitman’ sound mix was aggressive on Blu-ray, ‘Max Payne’ takes it to new heights. With both films being from FOX, it has allowed the FOX engineers to take yet another action film up a notch. This is a demo worthy mix that could easily sell those on the fence about the format. The soundfield is immersive at all times no matter if it is the special effects or dialogue. I was literally amazed with the amount of bullets panning from each speaker in the rears. It sounded as if there were bullets ricocheting off of the walls in the room. Bass was punchy as it shows with the amount of gunfire and explosions. Dialogue is also well placed in the center channel sounding crisp and clear. The best part of this all around aggressive soundtrack is that it is well balanced between the dialogue and sound effects.
Audio Quality: 4.5/5

Features are presented in both standard and high definition. There is a nice set of features available on this Blu-ray release, except I expected more. I am a tad bit surprised that there weren’t some trailers for the videogames even though they are older releases.
Special Features: 4/5

This is probably one of the best videogame adaptations to film. I am glad that Uwe Boll never had a chance to get his hands on this film as Director John Moore brings Max Payne to life. The film on Blu-ray offers reference like quality for video and audio. I highly recommend this film for fans of the videogame and those looking for an action film to kill a bit of time you won’t be disappointed.
Overall Rating: 4.5/5 (Purchase)