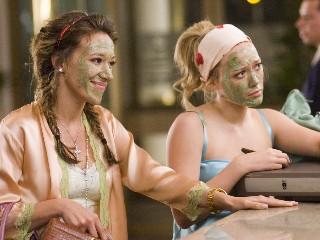 Glamour girls Hilary and Haylie Duff (featured in Lizzie McGuire and 7th Heaven, respectively) star as cosmetic heiresses Ava and Tanzie Marchetta, whose lives get turned upside down when their deceased father’s company is accused of selling toxic products. Wouldn’t you know it, Ava and Tanzie decide to go all Erin Brockovich and investigate. Material Girls should be awful–but it isn’t. It’s not a great film, it may not even be a good film, but it’s more watchable than it has any right to be, thanks to the confident and thoughtful guiding hand of director Martha Coolidge (Rambling Rose, Valley Girl). It’s hard to say exactly how a director can keep something like Material Girls from being as insipid as, say, New York Minute. Coolidge injects some hint of awareness of what it actually means to be poor, casts some surprising actors (like Anjelica Huston, Prizzi’s Honor; Brent Spiner, Star Trek: The Next Generation; and Lukas Haas, Brick), and somehow makes the Marchetta sisters both vapid and sympathetic–all of which is some impressive cinematic alchemy. The result is the most enjoyable film of Hilary Duff’s career. 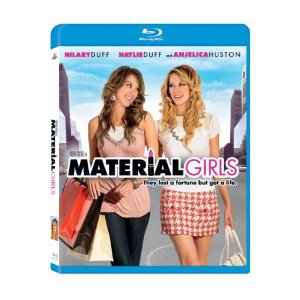 Material Girls stars sisters Hilary and Hayley Duff as two fictional sisters who are heiresses to a major corporation and the money it produces. The Marchetta girls are the faces of the Marchetta cosmetics company, started by their late father, but that’s all they really are – the figureheads. The company is actually run by their father’s best friend and the man who holds their company – and fortune – in trust. When a scandal breaks loose regarding toxic ingredients in the cosmetics and facially damaging products, the sisters lose their fortune overnight and become “poor.” (Sort of.) But something doesn’t seem right… so they take matters into their own hands and investigate the situation.

It’s hard to imagine that anyone could be so clueless about the real world and the issues that regular people face, but the Marchetta girls don’t think beyond the latest fashion or party. They’re so self-focused to the point of rudeness, and it’s not until the tables are turned that they realize there’s a bigger world out there. (And they’re still pretty rude and self-centered.) I also found some things hard to believe – from what I could tell, the girls weren’t of age (hence the “in trust” issue with their father’s friend), and yet they’re living in this huge mansion with no one to supervise them but servants. Where’s their mother? When their house burns down they don’t turn to family, they turn to their former housekeeper to take them in.
Movie Quality: 4/10

The print is presented in 1080p/AVC MPEG-4 with a 2:35:1 aspect ratio. I found this print to be rather eye pleasing with vibrant colors. Fleshtones are very natural and accurate, considering that we see a few bare necessities throughout. Black levels are solid throughout. The image was also sharp with excellent details. The image is clean and pristine making this a very nice looking image.
Print Quality: 8/10

The audio is presented in a DTS-HD MA lossless 5.1 mix. This film is a dialogue driven film. Dialogue was clean through the center channel with a nice degree of depth. I never had to raise or lower the volume to make out what was being said. The soundfield does get a few effects into play, but nothing major. The soundtrack takes advantage of the soundfield with audio also pouring through the rears.
Print Quality: 8/10

‘Material Girls’ starts out with a horrible version of the song Material Girl and gets worse and worse. Lame acting, very lame, nothing is believable, especially the ending which didn’t even make sense to me, so how could the two clutzes figure it out? I do not recommend this film at all unless you are a fan of the Duff sisters, than you will obviously enjoy this film.
Overall Rating: 4/10