Master of the World DVD Review 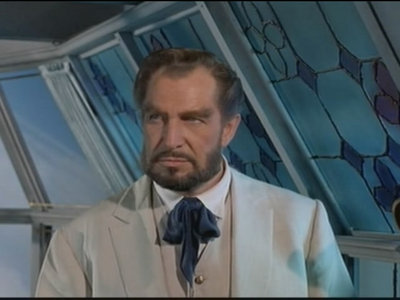 The world in the late 19th century: A scientist and his team are held as “guests” of Robur on his airship, that he want to use to ensure peace on earth. Peace with all, even if he has to bombard military targets all over the world. Can the scientist stop him? 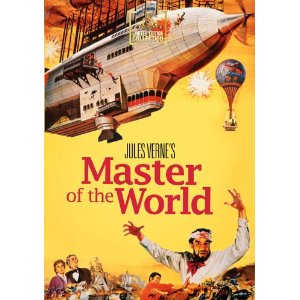 Verne’s novels are full of political (usually left-of-center) messages, attacking imperialism of sorts. He detested the British Empire and the hypocrisy of the Anglo-Saxons. Being French this was understandable, as was his dislike for Prussian militarism after the Franco-Prussian War of 1870. He mistrusted the commercial thrust of American business. But he never saw the hypocrisy of French Imperialism (France was on a civilizing mission unlike Britain). He also could reveal traces of racism himself – witness his “Jew” in the novel HECTOR SERVADAC (known as LOST ON A COMET) who is a malignant money lender. But even here Verne equates the Jew with the “modern, greedy German Empire”. Richard Wagner would have been truly shocked.

Still with all his flaws, he is a worthy writer to still read and reread as an adult. However many of his books do not get reprinted or reread. Actually there are about seventy novels, short stories, plays or his that are mostly unread except by his fans. Still, a careful student of movies will notice that besides the top titles there have been some obscure novels that did see the screen. For instance Yul Brynner and Kirk Douglas starred in THE LIGHT AT THE EDGE OF THE WORLD. George Segal and Orson Welles were in THE SOUTHERN STAR.

Because he predicted the submarine and space travel Verne was capable of noting the development of air travel. It used to be frequently mentioned that he wrote a novel called THE CLIPPER OF THE CLOUDS (1886). In fact the title is ROBUR THE CONQUEROR. It expounds the inevitable success of heavier than air flight over lighter than air flight. Like several of his novels it required a sequel, and in 1904 MASTER OF THE WORLD appeared. Robur returns in the sequel with a plane which is also a very fast power boat and automobile, but he is insane. Robur destroys himself because he believes he is unstoppable, only to be stopped by a lightning bolt.

The problem is that THE CLIPPER OF THE CLOUDS is a miserably bad novel. Verne had a contract with Hetzel, his publisher, in turning out novels, and while his best work is really good when he did a bad job he really blew it. Basically he takes the character of Nemo in TWENTY THOUSAND LEAGUES and transposes him to Robur in a different traveling device for a different element of our planet. But Captain Nemo (alias Prince Dakar of the Sepoy Rebellion) has a personal grudge against imperialism and the British Empire – something that Verne’s novel only brings out when properly translated. This is why Nemo sinks British liners and warships, and why he supports freedom fighters around the globe. Robur is a self-centered engineering genius, who arranges the kidnapping of Uncle Prudent and two others to demonstrate that his “Albatross” aircraft can beat the balloons and dirigibles. In the novel THE CLIPPER OF THE CLOUDS there had been a debate that Robur came to, and his inflammatory comments set off similar comments by Prudent and the others. So he shows them his flying machine. But his intention is to keep them prisoner. Keep in mind, the prisoners in TWENTY THOUSAND LEAGUES were accidentally snared by the Nautilus when it was attacked. Nemo never intended to kidnap them – in fact, as he is carrying out a military campaign against the British his holding the men hostage has some rationale as a security matter.

Based on two Jules Verne novels. This is an exciting action adventure with an emphasis on world domination and flying machines. The evil Robur (Vincent Price) is the navigator of an airplane ship hell-bent on destructing all of the worlds war machines and armies for the purpose of peace on earth (what a mad case).
Overall Rating: 7/10