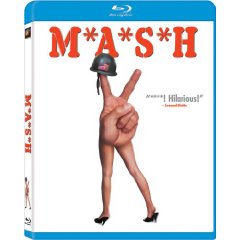 It’s set during the Korean War, in a mobile army surgical hospital. But no one seeing M*A*S*H in 1970 confused the film for anything but a caustic comment on the Vietnam War; this is one of the counterculture movies that exploded into the mainstream at the end of the ’60s. Director Robert Altman had labored for years in television and sporadic feature work when this smash-hit comedy made his name (and allowed him to create an astonishing string of offbeat pictures, culminating in the masterpiece Nashville). Altman’s style of cruel humor, overlapping dialogue, and densely textured visuals brought the material to life in an all-new kind of war movie (or, more precisely, antiwar movie). Audiences had never seen anything like it: vaudeville routines played against spurting blood, fueled with open ridicule of authority. The cast is led by Elliott Gould and Donald Sutherland, as the outrageous surgeons Hawkeye Pierce and Trapper John McIntyre, with Robert Duvall as the uptight Major Burns and Sally Kellerman in an Oscar-nominated role as nurse “Hot Lips” Houlihan. The film’s huge success spawned the long-running TV series, a considerably softer take on the material; of the film’s cast, only Gary Burghoff repeated his role on the small screen, as the slightly clairvoyant Radar O’Reilly.

As the 1970’s took off and Vietnam was well underway struggling TV director Robert Altman put together one of the finest films of the decade. contrary to popular belief MASH takes place during the Korean war at an army hospital. Although the film doesn’t always take itself seriously the themes of the film do.

The film is basically an anti-war film. the characters seem as though they have to be there and are never at any time letting the war go to their head. It displays the rebelliuos spirit of the 70’s and might be the most well acted comedy of all time. Looked over on Oscar night in favor of PATTON, MASH is a superior film. It shows the bond of friendship and despite being a heilocopter ride form the front lines the team is never at on edge and anyone to seriuos is gone.

Donald Sutherland (Hawkeye) and Elliot Gould (Trapper) are both brilliant as the crazy surgeons trying to keep sane among the chaos of war. The tone of the film is wilder than in the TV series, of the original movie cast only Gargy Burghoff (Radar) went on to star in the TV version. These days I find I prefer Donald Sutherland’s Hawkeye, Alan Alda’s unrelenting niceness gets on my nerves a bit. In the film version there are two other surgeons who share Trapper and Hawkeye’s anarchic activities, Duke Forrest and Spearchucker Jones.
Movie Quality: 9/10

The print is presented in 1080p/AVC MPEG-4 with a 2.35:1 aspect ratio. The film is 40 years old and is nearing its 30 year Anniversary. I have seen the film on broadcast television and the two DVD releases over the years, the film has never looked so good. The print has been cleaned up rather well for the Blu-ray release when compared to the DVD. While things aren’t perfect, there is grain still on the print, but nowhere near what was found on the DVD. I found the colors to be rather flat lacking any pop.
Video Quality: 8/10

The audio is presented in DTS-HD MA lossless 5.1 mix. While I find the new mix to be a nice added bonus since there is a bit more going on due to the sound effects, I did find some of the effects to be rather scratchy at times. Dialogue comes through the center channel rather clear.
Audio Quality: 8/10

For those expecting the TV sitcom, the movie will appear to be completely different. But watching the scene where Burns and Houlihan go at it, and the boys slip a microphone into their tent, you’re know these are the same characters you’ve always loved- they just look a little different. This is highly recommended for fans.
Overall Rating: 8.5/10