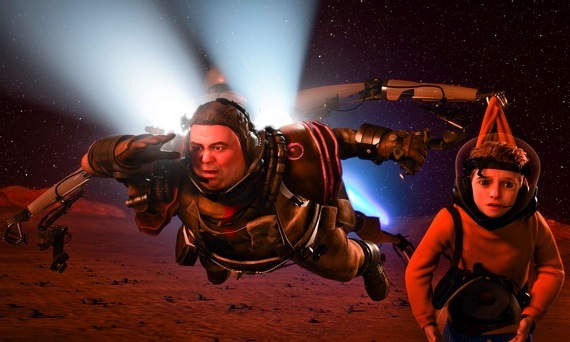 Mars Needs Moms is a comic animated adventure about moms, Martians, and mutiny. Martian hatchlings are springing up out of the ground up on Mars, and there’s a desperate need for a good mom to raise the babies. Mars matriarch “The Supervisor” (Mindy Sterling) sets her sights on Milo’s mom (Joan Cusack) because she’s doing such a good job raising Milo (Seth Green) down on Earth, and she quickly abducts her. As luck would have it, Milo’s just said something to his mother that he’s come to regret, goes into her room to apologize right as she’s being abducted, and winds up getting caught in the spaceship that’s transporting her to Mars. On Mars, Milo meets a strangely childlike human named Gribble (Dan Fogler), and the two quickly become friends and set out on a bumbling mission to rescue Milo’s mom. Along the way, they get a little help from Martian Ki (Elisabeth Harnois), who sees things a little differently than other Martians, thanks to her exposure to some Earth television from the flower-power era. What ensues is a dangerous and exciting adventure that yields a surprising revelation about the role and value of mothers. Mars Needs Moms utilizes the same digital performance-capture technology animation as Polar Express, and it is a visually stunning film. The pace is exciting; the characters are well developed, captivating, and often quirky; and the story speaks to kids and adults alike. Mars Needs Moms earns a PG rating because of sci-fi action and peril, and it’s probably a bit too intense for kids under 7, as well as older children who are especially sensitive. 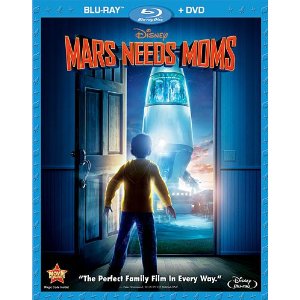 Studio: Walt Disney Studios Year: 2011 Release Date: August 9, 2011 Run time: 88 minutes Rating: PG Audio: DTS HD MA lossless 5.1 mix Aspect Ratio: 2.40:1 Disc Spec: 1 BD / 1 DVD Region: A “Mars Needs Moms” relates the adventures of Milo, a boy who seeks to rescue his kidnapped mother from Martians . Based on a children’s book by the famous comic strip author Berkeley Breathed, this animated film, while uneven in certain respects, excels in its depiction of sacrificial family love. Milo is truly heroic in his single-minded determination to free his mother despite insurmountable odds and even a powerful temptation to give up. I also found the Martian settings to be artistically imaginative, fascinating, and impressive. The film’s portrayal of the relationship between an American mother and her son was not only realistic but profoundly moving. Young Milo attempts to deceive his mother. Like all good mothers, she catches him out and holds him accountable. Like all disobedient children (which covers most of the human race at one time or another), Milo angrily lashes out at her. In a moment that rings true with my own childhood and with our own children on occasion, Milo’s mother is reduced to tears by her son’s cruel words. Milo tries to go to sleep but the guilt over his response to his mother troubles him. He gets up to apologize, only to discover that he is, in one sense, too late. His mother has disappeared. In another sense, he arrives in the nick of time, just able to follow after the strange beings who have kidnapped his mother. Love for his mother stoked by his remorse for his meanness fuel an unquenchable determination in Milo to rescue her. Within a fast-paced, wildly fantastic and carelessly implausible animated movie, this true-to-life family relationship comes as somewhat of a surprise. But the film succeeds brilliantly because the filmmakers remain true throughout to the theme of love between a mother and son. Milo’s mother has been kidnapped by a radical feminist Martian society that has all but destroyed maternal love in its elevation of power and technological progress. The Martians abandon their males at their planetary dump and leave their females to be raised by robot nursemaids. But little ones, even in a twisted society, need more than a robot to be cared for properly. Presumably unable and/or unwilling to provide quality maternal nature themselves, the Martian supervisors spy out likely outstanding mothers on planet Earth and kidnap the best candidates in an evil plan to enrich the maternal behavior of the robots. Movie Quality:7/10

The print is presented in 1080p/AVC MPEG-4 with a 2:40:1 aspect ratio. This is a very stylized film with blue and orange tints and various dark colors that make the film pop. The color palette is very strong throughout. The reason is due to the film’s nature, certain colors such as reds stand out the most. Black levels are deep with an ink like look. Details are excellent providing various sense of depth. Scenes up close and when the camera pans away show provide stunning details. This print pops off of the screen giving it a 3-D look and feel. This is a great example of how animations can look if done right.

The audio is presented in a DTS-HD MA l0ssless 5.1 mix. This is mainly a film with dialogue pushing the center channel which is crisp and clear. When the surrounds are used with sound effects such as lightning strikes, noises from the animals, and the soundtrack this packs a punch. With this being a story driven film, the audio is perfect for what it tries to achieve. There will be no disappointments at all.

It is my hope that the mostly brilliant folks at Disney made a few marketing errors and missed their target audience. If you believe that the natural human family is a fundamental, even divinely ordained social unit with motherhood being one of its key components, please give this film and the dvd a chance. You may find yourself not only entertained, but surprisingly moved. Overall Rating: 7/10