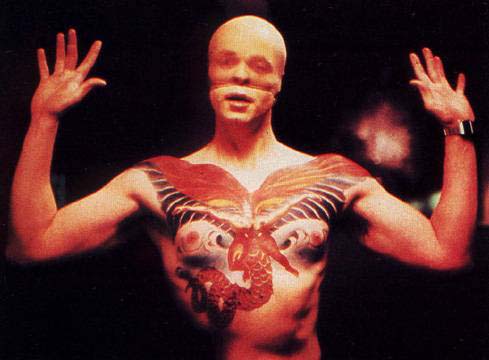 Graham’s approach to the case is a perilous one. First he seeks counsel with Lecter (Brian Cox) in the latter’s high-security prison cell–an encounter that is utterly horrifying in its psychological effect–and then he begins to mold his own psyche to that of the killer, with potentially devastating results. As directed by Mann (who was at the acme of his success with TV’s Miami Vice), this sophisticated cat-and-mouse game never resorts to the compromise of cheap thrills. Predating Anthony Hopkins’s portrayal of Lecter by four years, Cox plays the character closer to Harris’s original, lower-key conception, and he’s no less compelling in the role. Petersen is equally well cast, and as always Mann employs rock music to astonishing effect, using nearly all of Iron Butterfly’s heavy-metal epic “In-A-Gadda-Da-Vida” to accompany the film’s heart-stopping climactic sequence. All of this makes Manhunter one of the finest films of its kind, as well as further proof that Harris’s fiction is a blessing to any filmmaker brave enough to adapt it. 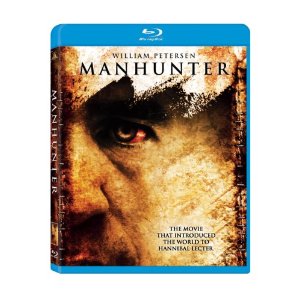 Based on Thomas Harris’ first Hannibal Lecter novel Red Dragon, Manhunter stars William Petersen as former FBI Profiler Will Graham who returns to duty to persuit a serial killer who slaughters families. Graham’s unique asset in profiling criminals is the ability to become so intimate with their thoughts that they combat with his sanity. In order to get his “scent” back for these murderers, Graham visits serial cannibal Dr. Hannibal Lecktor played by Brian Cox. Graham was the one who caught Lecktor but he still fears Lecktor because of what he is and Graham continues to be terrorized by him to some degree through out the film. The killer in question, named Francis Francis Dollarhyde and played by Tom Noonan, slaughters these families and arranges their bodies to stare at him in awe according to his own fantasties. Dollarhyde feels that if he kills enough people he will “transform” into a being who would be accepted after feeling rejected all his life. This being Francis hopes become is The Red Dragon from William Blake’s painting “The Great Red Dragon and the Woman Clothed with the Sun”.

Micheal Mann’s adaptation of Harris’ novel is serviceable but it lacks it certain areas. First off the atmosphere of the film is dark but at the same time Mann has that annoying habit of insisting upon the post modern aestetic of the time; cold and lacking in intimatcy and all bathed in white. Worst of all the 1980’s pop songs date the film unnessecarily. I am not against films looking contemporary but here it’s highly unessecary. The later day Lecter films all succeed in having a timeless look to them.

The characterizations are also questionable. William Petersen as Will Graham seems like a complex indvidual but he is written as more of a “tough guy” better suited as a cop in a Dirty Harry film or his previous effort in To Live and Die in LA and not someone who is truly, emotionally scared by what he does. Brian Cox does a decent job as “Lecktor” but he’s forgetable in this film. He doesn’t penitrate the screen at all. Cox certaintly comes off as a sociopath but not the the man so evil that professional psychiatrists simply describe as a monster. Lastly the biggest mis-calculation is Francis Dollarhyde. Mann entirely omits Dollarhyde’s tragic childhood in his screenplay, the core motivation of Francis’ sick fantasties, and makes him to be some sort of super human freak who can kill people with little effort.
Movie Quality: 7/10

The print is presented in 1080p/AVC MPEG-4 with a 1:85:1 aspect ratio. Out of all the films released by , this is the most eye pleasing transfer with a consistent image quality. Colors are vibrant and bold throughout the entire film. Details are very well captured for a film that is 23 years old. Grain is intact and holds a consistent look throughout. Fans of the film will not be disappointed at all..
Print Quality: 9/10

The audio is presented in a DTS-HD Master Audio 5.1 mix. ‘Manhunter’ is a dialogue centric and the main focus. For those going in expecting an intense and complex audio experience you might be a little disappointed. There are some effects that peer through the rears providing some ambiance into the soundfield. While this is not a bombastic soundtrack, it is the best that these films have sounded for home video.
Print Quality: 9/10

Mann’s film isn’t entirely bad. William Petersen does a good job to hold the film together and at times, there is a genuine feeling of suspense. It’s a curiosity in the Lecter series but far from the best. ‘Manhunter’ is a decent film with some flaws, but does a good job telling a story.
Overall Rating: 7/10