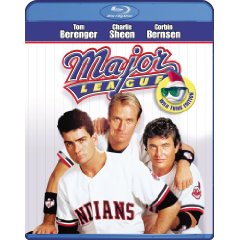 A baseball comedy and slob comedy rolled into one, this one actually works as entertainment, if not as a piece of cinematic mastery. James Gammon is the has-been manager hired to lead the last-place Cleveland Indians whose owner wants them to lose so she can sell them. But the team of has-beens and never-wases that he assembles (including Tom Berenger, Charlie Sheen, Corbin Bernsen, and Wesley Snipes) develops a sense of pride and turns the team around. There’s plenty of rowdy humor about sex, race, and whatever else they can make fun of. Look for Rene Russo (in her first film role) as Berenger’s romantic interest; Snipes also had his first showy role as Willie Mays Hayes, the team’s base-stealing ace.

The Cleveland Indians haven’t won a title, much less gone on to the finals for too many years. The people have become tired of their losing streak. When Rachel Phelps (Margaret Whitton) inherits to team from her late husband, she concocts a plan to get the team to Miami by hiring a bunch of has-beens and never was-es. If they get dead last, she just might have her dreams come true. So signed onto the Cleveland Indians are manager Lou Brown (James Gammon), catcher Jake Taylor (Tom Berenger) who has bad knees, Rick ‘Wild Thing’ Vaughn (Charlie Sheen) who is a punk with an incredible pitching arm, a player who can’t catch Roger Dorn (Corbin Bernsen), Willie Mays Hayes (Wesley Snipes) who may run like the wind but not hit a single ball, Pedro Cerrano (Dennis Haysbert) a man who relies on voodoo to try to improve his hits, and more.

The team goes through incredibly funny times as they get better at the same time Rachel Phelps give them a miserable time. So they come up with idea to stop Rachel Phelps; they’ll just have to win the title! But will they ever be able to work together as a team? As starring is Rene Russo as Lynn Wells, Jake Taylor’s ex-wife. Also there’s Bob Uecker as Harry Doyle, the radio broadcaster for the Cleveland Indians.

The movie entertains and humors with the sarcastic wit, hilarious jokes, obvious slapstick comedy, and laugh out loud situations. “Major League” fits right into the genre of a comedy, with all the actors doing a tremendously funny job. Everyone delivers there lines and plays their parts to perfection.
Movie Content: 9.5/10

The print is presented in 1080p /AVC MPEG-4 encode with a 2.35:1 aspect ratio. Having seen this film multiple times on broadcast television and DVD, I was rather surprised at how well the image quality looks in high definition on Blu-ray. Paramount continues to go the extra mile with yet another one of their catalog titles. Colors appear to be muted and dull looking. Where colors suffer a bit due to the age of the film, the image excels in terms of clarity and details. There is some small hints of grain in the print that never becomes a hindrance. If there is one thing that is distracting, it is the dirt and specs that are apparent in a few scenes.
Print Quality: 8.5/10

The audio is presented in Dolby TrueHD 5.1 mix. This is not a mix that will blow you away, but the rears do provide several moments of excellent sounding effects. The soundtrack is also very good and fits the film well. The dialogue is clean and clear through the center channel. For a film that is 20 years old, this is a well balanced mix.
Audio Quality: 7/10

‘Major League’ is a great comedy on America’s past time, baseball. Charlie Sheen, Tom Berringer, and Corbin Berson lead the pack with a great supporting cast making this one exciting film from start to finish. The film on Blu-ray offers excellent video, while the audio is lacking a bit. I highly recommend ‘Major League’ on Blu-ray for fans of the film, and even those looking for an evening of comedy.
Overall Rating: 8/10