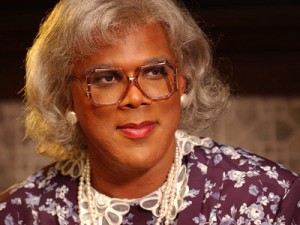 Madea, everyone’s favorite wise-cracking, take-no-prisoners grandma, jumps into action when her niece, Shirley, receives distressing news about her health. All Shirley wants is to gather her three adult children around her and share the news as a family. But Tammy, Kimberly and Byron are too distracted by their own problems: Tammy can’t manage her unruly children or her broken marriage; Kimberly is gripped with anger and takes it out on her husband; and Byron, after spending two years in jail, is under pressure to deal drugs again. It’s up to Madea, with the help of the equally rambunctious Aunt Bam, to gather the clan together and make things right the only way she knows how: with a lot of tough love, laughter…and the revelation of a long-buried family secret. 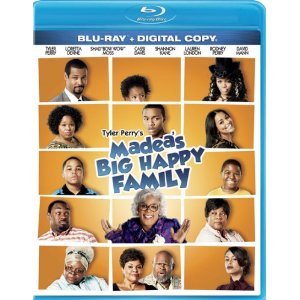 When Tyler Perry first came out, I enjoyed the Madea and Brown characters. However, the movies/plays began to bore me with the same plot. I applaud him for trying to highlight the many types of abuse but does that have to be part of every storyline? I LOVE the Color Purple too but does it have to be referenced in almost every movie??? If it wasnt a Color Purple reference, there were recycled lines from the previous play/movie. The difference this time was instead of recycling lines from the Color Purple or previous plays, he recycled lines from the Big Happy Family play and used them in the movie. About half the lines are exactly the same in the play and the movie!

The plot was about the same as any other plot. We have a drug dealer, someone who is molested, marriages that aren’t working, and even threw in a couple particularly trashy Maury Povich episodes arguing about who is the father of some children. This is in addition to another “surprise” kid. The stereotypes were in full effect in this film. Even the head mother was annoying. She just kept letting her kids run over her, and it seemed like Madea was the only one who had some kind of power to make people sit down and shut up. The rest of the women had enough strength to be brutal to the guys and kinda disrespectful to the head mother, but nobody really seemed to care.

Pros: Bow Wow’s performance in the film was REALLY good. I’ve enjoyed him in “Roll Bounce,” “Lottery Ticket” and a couple other flicks, but he did such an impressive job in this film. The only problem is that the film was so awful that I think his performance will be overlooked.
Movie Quality: 4/10

The print is presented in 1080p/AVC MPEG-4 with a 1:78:1 aspect ratio. Colors are vivid throughout the presentation. Black levels aren’t as deep. Flesh tones are accurate and natural looking. Details are also excellent. The print is pristine from any issues..
Print Quality: 9/10

The audio is presented in a DTS-HD MA l0ssless 7.1 mix. For a film of this nature, the audio is very engaging in the soundfield. The rears actually get a nice amount of usage with the soundtrack. Dialogue through the center channel is very clean and crisp. The mix is well balanced between the dialogue and soundfield.
Print Quality: 9.5/10

This is by far the worst movie he’s done, and I have been a Tyler Perry supporter for years. But it’s time to write about something else.
Overall Rating: 7/10