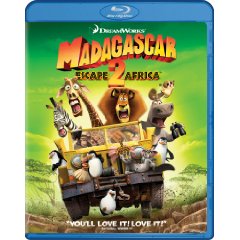 The original ‘Madagascar’ is one of my favorite animated films to ever be released. The 2005 original film was a huge hit for DreamWorks Animation bringing in $532 million dollars worldwide at the box office. The sequel does a tad bit better at the box office with a total $574 million dollars in ticket sales. This is DreamWorks Animation second most successful franchise right behind ‘Shrek’.

Our favorite friends from the first film are lost yet again. Alex the lion (Ben Stiller), Marty the zebra (Chris Rock), Gloria the hippo (Jada Pinkett Smith), and Melman the giraffe (David Schwimmer) are planning an escape yet again, except this time it is from Africa. King Julien (Sacha Baron Cohen) is the ruler of the animal kingdom in Africa. As they are trying to fly back to New York, their plane crashes into the wild jungles of Africa.

It seems like these guys could never get to their destination without some kind of roadblock. The good here is that Alex reunites with his mother and father Zuba (Bernie Mac). His mother recognizes him almost immediately while his father had some doubts at first. While there are happy times for a reunited family, there is a bigger problem with the evil Makunga (Alec Baldwin). He wants to rule the land by taking over in any manner possible.

‘Madagascar 2’ takes a few cues from ‘The Lion King’ infusing some similar ideas. While some aspects are not original in this film, it is still a very enjoyable film. It is the characters here that really make both ‘Madagascar’ films stand out. The voice talent is some of the best put together in an animated film. Between the story and voice talent, everything gels together so well here in the sequel.

I didn’t mention the penguins from the original film; well they are here in all their glory. They are another aspect of the franchise that makes this film so fun. They are up to their old tricks as they continue to throw orders around.
Movie Content: 4.5/5 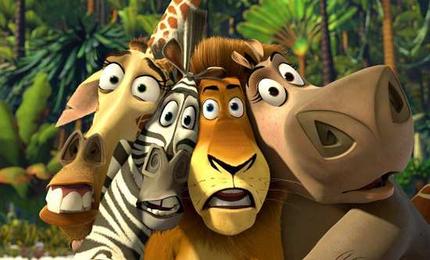 The print is presented in 1080p/AVC MPEG-4 codec with a 1.85:1 aspect ratio. This has to be one of the most vivid and colorful animations on Blu-ray. Due to the colors popping off of the screen, it brings out the details in the animation. Some good examples of fine details, look at Alex’s fur coat, you can see individual strands of hair.  This has to be one of the cleanest and most pristine animated films that I have seen. ‘Wall-E’ set a precedence with animation back this fall, but DreamWorks continues to churn out some beautiful looking animated films.
Print Quality: 4.5/5

The audio is presented in a Dolby TrueHD 5.1 mix and is mainly a film with dialogue pushing the center channel which is crisp and clear. The surrounds do get their work too when we get songs off of the soundtrack. This time around there are even more effects than the first film with an even higher production budget.
Audio Quality: 4/5 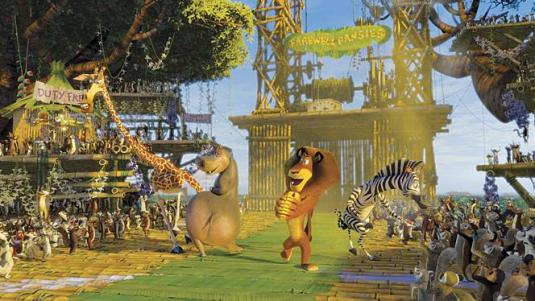 There are a plethora of extras for ‘Madagascar 2’ and when they are all presented in high definition, it continues to show that DreamWorks Animation is serious about the Blu-ray format.

While ‘Madagascar: Escape 2 Africa’ lacks a tad bit in originality, it is an excellent animated film. Fans of the original will not be disappointed and the Blu-ray version of the film has some excellent video, audio, and a plethora of special features in high definition.
Overall Rating: 4/5