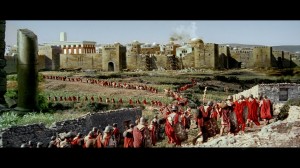 This 1961 version of Jesus’ story gives historical context to the best-known Biblical tale and features many memorable moments, such as a moving Sermon on the Mount and a vixenish Salome dancing for her stepfather in a performance that rivals today’s MTV video offerings. Orson Welles keeps the 168-minute film moving along with informative narration helpful to those who haven’t read the New Testament in a while. Made with backgrounds that resemble Southern California more than Palestine and a European and American cast–including a blonde, blue-eyed Jesus and an Irish-accented Mary–this movie has the definite stamp of Hollywood.

‘King of Kings’ features Jeffrey Hunter’s finest performance, as a young, dynamic Jesus of Nazareth, and his intrerpretation, open and earnest, is the best part of a movie both uneven and flawed. 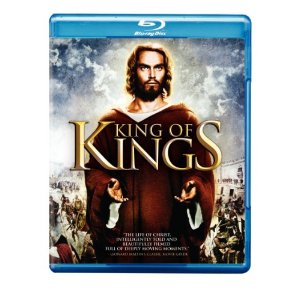 Studio: Warner Home Video Year: 1961 Release Date: March 29, 2010 Run time: 168 minutes Rating: PG-13 Audio: Dolby Digital 5.1 mix Aspect Ratio: 2.35:1 Disc Spec: 1 BD Region: 1 ‘King of Kings’ features Jeffrey Hunter’s finest performance, as a young, dynamic Jesus of Nazareth, and his intrerpretation, open and earnest, is the best part of a movie both uneven and flawed. Produced by many of the people responsible for ‘Ben Hur’, the film utilizes some of the same sets, actors (Frank Thring appears in major roles in both films), and composer (Miklos Rozsa, whose score for ‘King of Kings’ was one of his finest). The cast was fleshed out by respected actors (Robert Ryan is too old but charismatic as John the Baptist, Siobhan McKenna is a glowing Mary, Brigid Bazlen, a deliciously wicked and oversexed Salome, Harry Guardino, an ‘over-the-top’ Barabbas, a VERY young Rip Torn scores as Judas). While the cast didn’t have the ‘star power’ of ‘Ben Hur’, or many other Christian epics, the actors, by and large, perform credibly in their roles, particularly Hurd Hatfield and Viveca Lindfors, as Pilate and his wife, Claudia, and Ron Randell as Tribune Lucius. The film was a MUCH less expensive project than ‘Ben Hur’; the budget restraints show most glaringly in recreating Jesus’ ministry (most of Christ’s miracles are only referred to, not shown), and extras casting (Spanish townspeople, overdubbed with some truly RIPE dialogue!). The film works best when focusing on Jesus; unfortunately, it veers off into distracting subplots about Barabbas and the zealots, and the decadence of Herod’s court. These stories consume a LOT of screen time, and damage the overall impact of the film. Yet rising above all this is Jeffrey Hunter’s interpretation of the Savior. Easily the most audience-friendly of all the actors who have assailed the role, Hunter took a lot of flack for his ‘matinee idol’ good looks, and piercing blue eyes, but his kindness, his sincerity, and the complete believability with which he delivers Christ’s words overcome any qualms about his appearance! The Sermon on the Mount is a film high point, and magnificent; the Crucifixion and Resurrection have the kind of power that can bring a lump to your throat, even after repeated viewings! Movie Quality: 9.5/10

The print is presented in 1080p/AVC MPEG-4 with a 2:35:1 aspect ratio. ‘King of Kings’ is one of the most beautiful feature films ever created in part with the use of the Technicolor reds and blues really sticking out in this film. The transfer was well done on Blu-ray and still maintains the grains and grit that is also found on the DVD. This print has received a decent cleanup from the DVD versions with much less white specs and print damage to the point where it isn’t noticeable. Lighting is well done in the darker scenes of the film. Facial tones look great and very natural with excellent shadowing. Print Quality: 9.5/10 The audio is presented in a DTS-HD MA lossless 5.1 mix. I am a tad bit disappointed that the audio is at a lower level for dialogue. There are times where I had to have my receiver cranked up higher than normal just to hear the dialogue. The sound effects and score come through crystal clear. While the audio is still front heavy, it is rather impressive minus the low level of dialogue. Print Quality: 9/10

While ‘King of Kings’ lacks the big names and budget of ‘The Greatest Story Ever Told’, or the emotional core of ‘Jesus of Nazareth’ or ‘The Last Temptation of Christ’, in Jeffrey Hunter, the film presents possibly the most compassionate of all screen Messiahs, and makes this film a MUST for the holidays, and your collection!. Overall Rating: 8.5/10