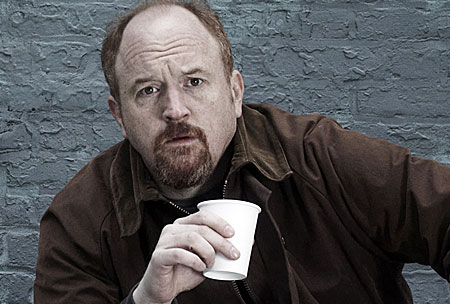 LOUISE tells the story of comedian Louie (played by Louis C.K.). Just divorced and a doting father, it tells of his everyday life and what happens in it. Some moments are touching, some funny and some just perplexing. But it’s his life and so we watch what happens. We try to relate to the situations he finds himself in. And short of living in New York I don’t think many people do find themselves in most of these situations.

The series covers such topics as dating after divorce, trying to raise kids, having fights with your friends and more. Intermingled with the stories are a few comedic moments but for the most part each episode just feels dry and lacking something. Laughs perhaps?

The series has received all sorts of accolades and comparisons to other series like CURB YOUR ENTHUSIASM. I might be in the minority here but that’s a series I’ve never seen. And if it’s anything like this one I doubt I’d ever want to.

So what is it about series like this that make people rush to praise them and talk about how wonderful they are? Why is it that shows concerning themselves with the miseries of someone trying to get on with life are entertaining? All I saw here was a man who had great friends but had trouble with a love life or a life at home. Isn’t that the life that most people lead? Aren’t we all having problems we have to confront and find solutions for daily? And if so and I’m living this, why would I find it entertaining watching someone else do what I do every day? Well I mean with the exception that I’m not making nearly as much money or on TV each week.

I’ve seen Louis C.K.’s stand up act and know he can be quite entertaining and funny. But there’s a difference between writing a stand up routine that is fine tuned over so many weeks on the road and trying to make up new jokes or funny antics on a weekly basis. The episodes I made it through here felt like they were one joke ideas that entire episodes were then built around. A single joke with plenty of filler. It would be as if a regular hamburger were placed on a Big Mac bun and covered with double toppings. Sure the meat was there but it was so covered by other items that you couldn’t enjoy it.
Movie Quality: 6/10

I know I’ll be raked over the coals by fans who adore the show as has happened to me before here. But the fact remains that not all comedy works for all people. Some may enjoy this while others don’t. If you choose to give it a shot, then walk in with an open mind not swayed by my slam or by those who praise it. Make up your mind for yourself.
Overall Rating: 7/10