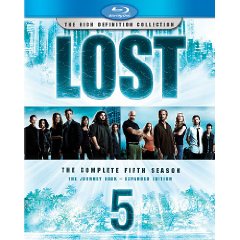 Since Lost made its debut as a cult phenomenon in 2004, certain things seemed inconceivable. In its fourth year, some of those things, like a rescue, came to pass. The season ended with Locke (Terry O’Quinn) attempting to persuade the Oceanic Six to return, but he dies before that can happen–or so it appears–and where Jack (Matthew Fox) used to lead, Ben (Emmy nominee Michael Emerson) now takes the reins and convinces the survivors to fulfill Locke’s wish.

As producers Damon Lindelof and Carlton Cuse state in their commentary on the fifth-season premiere, “We’re doing time travel this year,” and the pile-up of flashbacks and flash-forwards will make even the most dedicated fan dizzy. Ben, Jack, Hurley (Jorge Garcia), Sayid (Naveen Andrews), Sun (Yunjin Kim), and Kate (Evangeline Lilly) arrive to find that Sawyer (Josh Holloway) and Juliet (Elizabeth Mitchell) have been part of the Dharma Initiative for three years. The writers also clarify the roles that Richard (Nestor Carbonell) and Daniel (Jeremy Davies) play in the island’s master plan, setting the stage for the prophecies of Daniel’s mother, Eloise Hawking (Fionnula Flanagan), to play a bigger part in the sixth and final season.

Dozens of other players flit in and out, some never to return. A few, such as Jin (Daniel Dae Kim), live again in the past. Lost could’ve wrapped things up in five years, as The Wire did, but the show continues to excite and surprise. As Lindelof and Cuse admit in the commentary, there’s a “fine line between confusion and mystery,” adding, “it makes more sense if you’re drunk.” Other extras include deleted scenes, featurettes, a “lost” episode of Mysteries of the Universe, and commentary from writers Edward Kitsis and Adam Horowitz on “He’s Our You,” a reference to Sayid, who tries to change the future by changing the past.

Season five was the best of the recent seasons matching it with season ones heartfelt emotion and wonders of the beyond. I don’t wish to spoil anything for viewers of the show, or people ready to make the jump into the show and become a losty. Though I will say their are multiple time frames, dozens of iconic (for Lost that is) flashbacks, and a cast who can act beyond what I’ve seen on television as of late.

This season has so many moments that leave you mesmerized, shocked, and dumbfounded you crave to watch them all in chronological order. Sometimes you just don’t have time to catch them all in order on tv and the continuity becomes even more screwy with the ever deepening plot line. Thankfully the Lost Season 5 boxset will accompany you on the startling, adventures of the lost crew and hopefully give you an indepth look on things we may have overlooked.

This season has a couple extra long two hour episodes, and an amazing finale to recap everything, though it yearns to be completed upon the ending of the epic finale. In one year we will have everything (hopefully) answered. It’s one of those shows you want to read up on spoilers, but you wish not to spoil it for yourself and begin the wait.

Those not familiar with Lost, do yourself a favor if you’re interested in it… pick up the first season. The show only becomes more confusing, knowing the characters before they become more fleshed out will help you in the long run.
Movie Content: 9.5/10

The print is presented in 1080p/AVC MPEG-4 with a 1.78:1 aspect ratio. The print looks excellent for a television show presented in high definition. Colors are vibrant and strong as this show benefits a lot from being outside with vegetation, jungles, water, and the land that encompasses the island. Blacks are deep helping to bring out the best details of the print. Fleshtones are natural looking realistic which again adds to the excellent details. Disney does an excellent job yet again with bringing ‘LOST’ Season Five to high definition.
Video Quality: 9.5/10

Audio is presented in DTS-HD MA lossless 5.1 mix. Like many television shows, ‘LOST’ is dialogue driven, with bits and pieces of action. The soundfield does get some activity due to the score and with effects. The rears when they were in action pushed the sound effects directionally from speaker to speaker. Dialogue was clean and crisp sounding well balanced with the surround mix.
Audio Quality: 9.5/10

The special features are very good and there are a plethora of extras in this release. All features are presented in high definition.
Special Features: 10/10

Overall, this is the most ambitious Blu-ray release for “LOST” in terms of special features but also the picture and audio quality is absolutely fantastic. If you are a major “LOST” fan, this latest “LOST – The Complete Fifth Season” Blu-ray set is highly recommended!
Overall Rating: 9.5/10