Although it was ultimately overshadowed by Peter Jackson’s live-action Lord of the Rings trilogy, Ralph Bakshi’s animated adaptation of J.R.R. Tolkien’s fantasy classic is not without charms of its own. A target of derision from intolerant fans, this ambitious production is nevertheless a respectably loyal attempt to animate the first half of Tolkien’s trilogy, beginning with the hobbit Frodo’s inheritance of “the One Ring” of power from Bilbo Baggins, and ending with the wizard Gandalf’s triumph over the evil army of orcs. While the dialogue is literate and superbly voiced by a prestigious cast (including John Hurt as Aragorn), Leonard Rosenman’s accomplished score effectively matches the ominous atmosphere that Bakshi’s animation creates and sustains. Bakshi’s lamentable decision to combine traditional cel animation with “rotoscoped” (i.e., meticulously traced) live-action footage is jarringly distracting and aesthetically disastrous, but when judged by its narrative content, this Lord of the Rings deserves more credit than it typically receives. 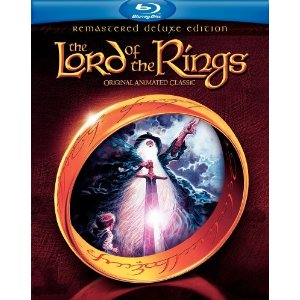 Looking at it today, I still like it, but it could have been so much better. Prior to CGI effects, there simply wouldn’t have been any way to bring Tolkien’s Middle Earth to the screen in a live action version. The huge battles, and some of the more fantastic creatures couldn’t have been done with the special effects of the time, not very well anyway. Unfortunately, it has to be said that Bakshi didn’t do any better answering some of those same challenges. The rotoscoped live actors of the battle scenes just don’t fit in with the rest of the animation, and are too obviously guys in rubber masks. The Balrog, as it appears in this film, is also quite obviously just a rotoscoped guy in a very cheesy-looking suit. Disney animators (whatever else they might have done, for good or ill) would have made the Balrog as spectacular and frightening as one could have wished for. The only animation that really looks good in this movie is that of the main characters (and even there, Aragorn looks a little too much like an Apache for my taste).

But in truth, the problems with this film are mostly of the technical sort. The voice acting is really quite good, and both the action and the characterization are actually far more faithful to Tolkien’s novels than in the Peter Jackson movies. In the scenes in the Shire, in the Inn in Bree, the Council of Elrond, and all throughout the film, Bakshi used Tolkien’s dialogue almost unaltered (parts were edited out to keep the film’s run time from being overlong, but what was used is pretty much just as Tolkien wrote it), whereas Peter Jackson and co. rewrote almost every line of dialogue spoken by every character. Bakshi portrayed Pippin and Merry just as Tolkien had portrayed them: as trusty, stalwart companions, whereas Jackson turned them into a couple of half-witted buffoons played for comic relief, and even a bit of bathroom humor in one scene. Bakshi made Theoden a valiant warrior king (after being healed by Gandalf), whereas Jackson made him weak-willed and indecisive at Helm’s Deep. Bakshi made Aragorn the hardy, wayworn ranger, fulfilling his destiny just as Tolkien had shown him doing, whereas Jackson portrayed hims as running from his responsibilities until his hand was forced. Bakshi, in portraying the scenes at the Prancing Pony inn at Bree, the Council of Elrond, Boromir’s final battle, and other scenes, played out the action just as it was in the books, whereas Jackson made considerable changes.

And Jackson made more and more changes to Tolkien’s narrative with each film. As the great reviews poured in following Jackson’s “The Fellowship of the Ring”, the second and third films showed progressively more tendency on the part of Peter Jackson to put his own stamp on the saga, featuring increasingly severe deviations from the original story in the books. I don’t insist that every novel brought to film be made absolutely 100% faithful to the original story — indeed, oftentimes that’s not possible, as film is a very different medium. But most of the changes Jackson made were simply not improvements to Tolkien’s original story, and there’s no reason why the original could not have been filmed closer to the way it was written. After all, Bakshi did it more than twenty years earlier, and those were the parts of his film that worked the best. The flaws in the animated version come from elsewhere.
Movie Content: 7/10

The print is presented in 1080p/VC-1 with a 2.41:1 aspect ratio. I was really surprised by this print considering the age of the film. The opening credits of the film and the first few minutes had me a little bit on the worried side of things at first. Colors looked like they were bleeding, especially with reds. Then it seemed like things smoothed out after the first few minutes and colors didn’t look bad. Grain is kept prominent throughout the presentation never becoming intrusive and being intact. The print does have a few small issues with artifacts and some macroblocking. This never becomes an issue which would make fans rather happy.
Video Quality: 8/10

The audio is presented in Dolby TrueHD lossless 5.1 mix. While the video is in decent shape, the audio takes a serious hit and shows its age. This mix is more of a front heavy experience, with sound effects lightly pouring through the rears. Dialogue is presented through the center channel, yet there is issues with depth. I found the voices to not trail far enough into the room, making it a lighter audio experience.
Audio Quality: 6/10

I still appreciate this movie as a partly successful attempt to bring Tolkien’s magnificent epic to filmgoing audiences. Bakshi’s faithfulness to the original story is what makes this film watchable. The animation is very hit-and-miss, and there are legions of things one can see that could have and should have been done better, but fans of J.R.R. Tolkien’s work should appreciate what’s here for the good that’s in it. The video presentation was an actual surprise to me considering the age of the film, but the audio takes a serious drop. If you are a fan, this is highly recommended.
Overall Rating: 6/10