When you first start watching Little Miss Sunshine, you may have the alarmed feeling that you’ve accidentally picked up a heavy family drama. The Hoover family of Albuquerque NM is teetering on the brink of disaster. The film was a box office success with a worldwide total of $100 million dollars based off of a $8 million dollar budget.

Richard Hoover (Greg Kinnear) tries to maintain a desperately dynamic tone as he teaches a motivational class to six bored participants in a grungy classroom. His wife Sheryl Hoover (Toni Collette) has to go a psychiatric hospital to pick up her brother Frank (Steve Carell), a university professor who attempted suicide over unrequited love for a male graduate student.

She moves Frank into their suburban home where he has to bunk with teenage son Dwayne (Paul Dano), a devotee of Nietzsche, who has taken a vow of silence until he can escape his family by getting into the Air Force Academy. Richard’s dad (Alan Arkin), a resentful hippie, has been living with the Hoovers since getting kicked out of his retirement home for shooting heroin. And he happens to be the only one who cares enough to make time for pudgy 7 year-old Olive (Abigail Breslin) who wants to compete in beauty contests.

Yet even all this desperation holds a compelling edge of black humor. The plot immediately kicks into gear when circumstances involving a default move Olive into the finals of the Little Miss Sunshine beauty pageant to be held in Redondo Beach CA. The family has three days to get Olive to the beauty pageant in their unreliable Volkswagon bus – and of course the grandfather and the suicidal uncle can’t be left alone so they have to come, too. As does poor Dwayne.

Two key performances are Grandpa and Frank who have each decided they have nothing to lose. Frank develops a bemused and gentle hands-off approach to events: he just lets life happen to him and laughs at it. In that way, he’s a good companion for high-strung Dwayne. Grandpa, on the other hand, gets increasingly impatient with the adults and poor squeamish Dwayne whom he peppers with inappropriate sex advice.

But he’s always there to reassure Olive and help her develop her dance routine as best as an old reprobate like him can. I mean, what does he really know about sugary-sweet kiddie beauty pagents? But he does his best by Olive, even helping her pick her music. When the movie finally gets to the pageant after the family has been bickering and bonding on their increasingly bizarre road trip, you may burst out laughing when you recognize the first few notes of Olive’s chosen song. At least you will if you remember the 1980s – at the hilarious and inadvertent inappropriateness of it all.
Movie Content: 4.5/5

The print is presented in 1080p/AVC MPEG-4 encode with a 1.85:1 aspect ratio. This is a rather huge upgrade on Blu-ray over the DVD. I have owned the film on DVD since its release and have viewed it several times. The print actually looks stunning with a very nice looking color palette that pops. Black levels are deep throughout the film. There is some subtle hints of grain in the print, but not as noticeable.
Print Quality: 4/5

The audio is presented in DTS-HD MA lossless 5.1 mix. This is not an audio mix that you will go in expecting huge things from the soundfield as it is primarily a dialogue driven film. The dialogue is clean and clear through the center channel with no apparent issues. The rears do get some usage during times when sound effects are present or the soundtrack is playing. I was rather happy with the way the film sounded even better than the DVD version albeit this being a dialogue driven film due to the depth of the voices.
Audio Quality: 4/5 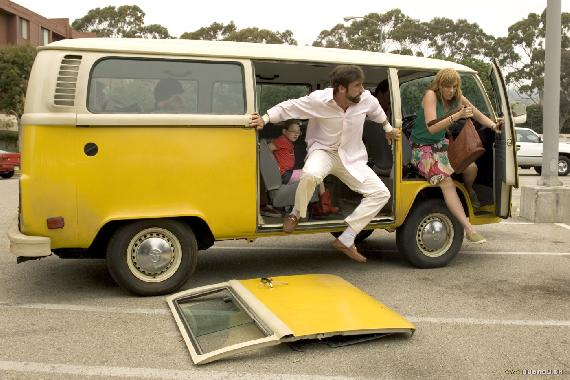 Owners of the original DVD release and fans of the film will be excited to see all features are ported over to the Blu-ray version. The deleted scenes are the only high definition extras that are available in 1080p, while the rest of the features are in standard definition.

In the end, though, this is a story about a family that sticks together. It’s a terrifically entertaining character-driven piece, and features fine acting by all involved. For those unsure about upgrading to the Blu-ray version, I highly recommend it as this is the ultimate package.
Overall Rating: 4/5