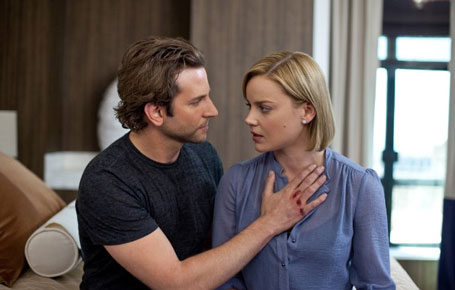 Depending on your take-away of the visual inventiveness and jam-packed plot that drives Limitless to peaks and valleys of preposterous fun, drugs are either a terrible scourge or the fundamental solution to all of life’s problems. Limitless isn’t exactly a morality tale, but the made-up drug that turns Eddie Morra (Bradley Cooper) from a scuzzy loser into a master of the universe does become a metaphor for ambition, menace, devastation, and ultimate success. Eddie is a writer who can’t write, his girlfriend (Abbie Cornish) just dumped him, and his squalid lifestyle has driven him to the breaking point. After a chance meeting with his mysterious ex-brother-in-law, he’s offered change in the form of a little transparent button, a pill code-named NZT that allows the user to access 100 percent of their brain. After he pops it, Eddie is transformed. Everything he’s ever heard, seen, glanced at, or passed by becomes neatly ordered in his mind. He has total recall, total access to knowledge both known and unknown, and he understands exactly what to do. Without the ingenious visual effects that frequently push the bounds of innovation, our view of the alteration of Eddie’s drug-induced reality would fail utterly. When his synapses snap from every new hit, the sparkling blue of Bradley Cooper’s eyes pops off of the screen, the colors and textures of his reality ripple and zoom with his every move. Of course he needs more of the drug to maintain his progression, not to mention his very life–remember, kids, drugs are addictive! 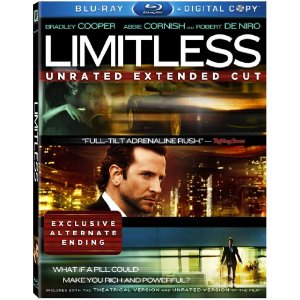 The premise is simple but intriguing, what if you had the ability to unlock the full potential of your mind? That is what Eddie Morra (played by Bradley Cooper) is presented with when his drug dealing ex brother in law hands him a pill to help him with his failing life. Feeling he has nothing to lose Eddie tries the pill and finds it works beyond his wildest imagination. Now armed with what he describes as “Limitless” capabilities to learn and use knowledge, Eddie quickly finds he effortlessly is able to navigate up the social-economic ladder. But the pill comes with side effects, as do most drugs, which threaten to not only derail his success but end his life.

Every aspect of Limitless is interesting and creative. The director, Neil Burger, makes bold choices in camera angles and lightening that really draw the audience into the world of the lead character. The story follows a logical build up of its plot without holes or requiring the audience to take a giant leap of faith of plausibility. The casting was spot on, particularly Robert De Niro, who plays a heartless business tycoon. De Niro is at his very best in his supporting role. Bradley Cooper has a breakout performance as he capably shifts from your average uninspired burnout writer, to a man who has the world in the palm of his hand, to a drug addicted addict suffering from paranoia. It’s a tough role and Cooper makes it seem effortless.

The entire concept is thought provoking and Limitless treats it’s concept well. The movie kept me guessing what may happen next the whole way through and the twists at its conclusion are great. There is really nothing not to like in this movie and I give it my highest recommendation. Limitless is the best movie of the year to date.
Movie Quality: 9/10

The print is presented in 1080p/AVC MPEG-4 with a 2:40:1 aspect ratio. Colors are deep and well saturated throughout the entire presentation. Blacks are strong and almost inky at times. Nowhere did the image ever appear soft with such strong colors and black levels. Flesh tones were also natural. The film carries a very clean look throughout which makes the excellent details stick out.
Print Quality: 9.5/10

The audio is presented in a DTS-HD MA l0ssless 5.1 mix. Dialogue for the most part is handled very well, except for a few scenes where I felt it was a tad softer. The score of the film is also very good. Music and other sounds throughout the film can be heard clearly. The sound stage does a nice job at whatever is thrown at it. I appreciated the parts that were “faster” so to speak with music and other sounds flying around the room.
Print Quality: 9/10

Except for a few lapses in logic and character motivation and action, I thought Limitless was a fascinating and suspenseful psycho-thriller. I very much liked the visual canvas, that is the cinematic use of color and movement the film employs. Good acting throughout in this speculative look at a drug that enables full brain function and the superman that it would create.
Overall Rating: 7/10