Let Me In Blu-ray Review 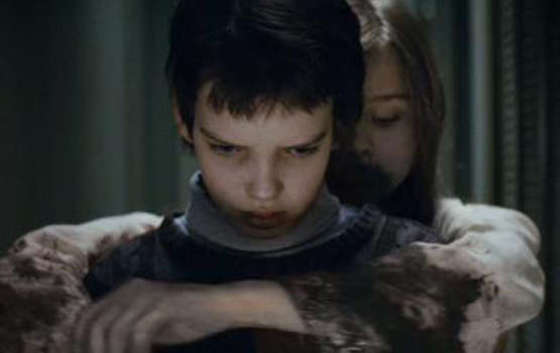 Let Me In blends the innocent face of Chloe Grace Moretz (Kick-Ass) with the darkness of vampirism. A young boy named Owen (Kodi Smit-McPhee, The Road) has troubles at home (his parents are divorcing) and at school (bullies pick on him mercilessly). But when a mysterious girl named Abby (Moretz) moves in next door, Owen hopes he’s found a friend, even though she smells a little strange. Unfortunately, his new friend needs blood to live, and the man who seems to be her father (Richard Jenkins, Six Feet Under) goes out to drain local residents to feed her. But even as Owen starts to suspect something is wrong, having a real friend might just matter more. Because the Swedish film adaptation of the novel Let the Right One In (on which Let Me In is based) was surprisingly popular and critically acclaimed, it’s going to be hard for Let Me In to avoid comparisons. Surprisingly, it retains much of the flavor and spirit of the original. It’s not as understated–this is an American movie, after all–and some of the creepiness is lost along with that subtlety. Despite that, Let Me In has its own spookiness and the performances (including Elias Koteas, Zodiac, as a local policeman) are strong. Directed by Matt Reeves (Cloverfield). 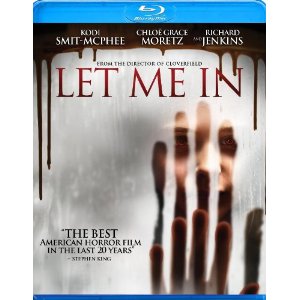 The differences between the two films are probably numerous to some who have obsessed over them, but as far as the storyline goes, they are pretty much the same. Obviously, there’s a bit of emotion lost from having to read the subtitles which non-Swedish speaking Americans will get to enjoy in this film. But it’s not all about the dialogue. There are long bouts of scary silence in both films where you don’t always want to know what’s happening (but you do), and you don’t need someone talking to tell you. The two lonely friends sitting outside in the snow on a jungle gym beneath the yellow security light plays on our emotions just as much as seeing Owen, the young boy, get picked on by his bullies.

Since I’ve seen both films, I’m going to tell you what I liked better about the Americanized version. First, I didn’t mind the lack of Owen’s father in the movie. His scenes are brief in the original, but not really needed for anything other than to establish is parents are separated but Owen still has a relationship with both. The lack of a father figure in his life is not really the reason Owen is such a weak character that always gets picked on at school. Again, dialogue quickly establishes that his parents are getting divorced. There’s only a phone call to his father in the remake, where he reaches out to him to ask if there is such a thing as evil.

I also thought Abby’s caregiver played much more of a part in this film and we really got to see his conflict play out. There are differences in his “killing” scenes in both films, but the reason behind them is the same. In the remake, however, we see that the victims live in the same apartment complex and Owen knows who they are by watching them through a telescope in his bedroom window.

All in all, it’s not a bad remake. Like I said, if you haven’t seen the Swedish version, you won’t be missing anything. The dynamic and sadness of both films is definitely there, even the bizarre ending which you’d never expect. The one thing that I didn’t like about the remake though was Owen asking Abby if she was a vampire. I also didn’t like the scenes where we got to see her face after she had fed and her appearance and eyes had become more monster-like. NOT seeing this sort of teases your mind and increases the intensity, and while Abby doesn’t answer Owen’s question, there was no need to establish what she was. What’s more important is that Owen doesn’t care about that. He only cares about her friendship.

The print is presented in 1080p/MPEG-4 codec with a 1.85:1 aspect ratio. I found the image quality to be very good in this remake and surpassing the original. The image quality is fantastic really bringing the best qualities of the film out. Colors are excellent throughout with a blue and gray tint being very dominant. Fleshtones are accurate with a nice touch adding to the look of our vampire. Black levels provide excellent depth. I was quite impressed by the print and thought it looked very good.
Print Quality: 9.5/10

The audio is presented in Dolby TrueHD 5.1 mix. The audio like in the original helped really pull me into the atmosphere of the film. I felt much immersed from the start of the film all the way to the end. The score is also very well done, but I did not find it to be as good as the original but it was sufficient enough to enjoy. Dialogue was clear through the center channel providing excellent depth.
Audio Quality: 9.5/10

It’s a remake, yes but it’s one of the best horror films and one of the best vampire films to come out of Hollywood in a while. Let Me In is an admirable film that would be much more respected if it wasn’t a remake. Few remakes live up to the original film while almost rivaling it as successfully as Let Me In does.
Overall Rating: 9/10