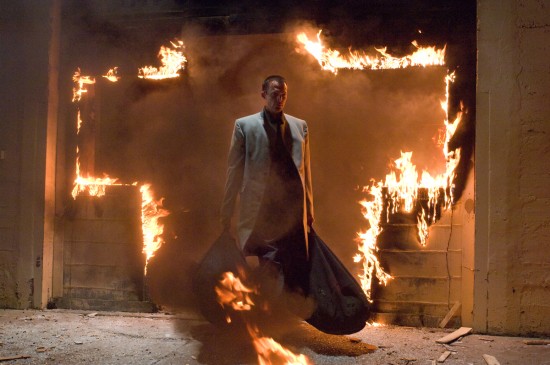 As pure check-your-head-at-the-door popcorn entertainment, the apocalyptic action-horror hybrid Legion delivers in nearly every frame–its story of a band of strangers fighting an army of angels and demons for the fate of mankind is proudly loud, bullet riddled, and knee-deep in gore and CGI. That doesn’t mean it’s particularly good or even coherent–the story has renegade angel Michael (a glum Paul Bettany) come to the aid of diner owner Dennis Quaid (equally glum) and his patrons (a cross-section of stereotypes embodied by a capable cast, which includes Lucas Black, Charles S. Dutton, Tyrese Gibson, Kate Walsh, and Jon Tenney) as a host of heavenly and diabolical beings, dispatched by an angry God, descend on the diner with the intent of killing waitress Adrianne Palicki (Friday Night Lights), whose unborn child may be the salvation of humanity. The orgy of special effects–endless hails of bullets and a menagerie of unpleasant demonic creatures, the most unsettling of which is the ice cream man (Doug Jones, Hellboy)–is eye popping but ultimately repetitive, and since no character rises above a cipher in director Scott Stewart’s script (cowritten with Peter Schink), the whole affair feels unwieldy and eventually tiresome under a barrage of hackneyed dialogue. Naturally, Legion ends with the possibility of a sequel, though one wonders where the story can go after Armageddon. 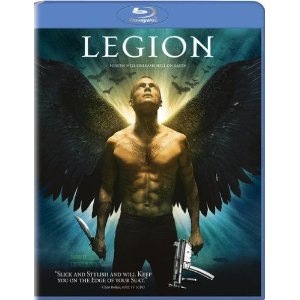 God has lost faith in humanity, something that hasn’t happened since the days of Noah. But instead of a flood, He has sent down a legion of angels, who possess the bodies of weak-minded people, turning them into … certainly not demons, but then again, there’s nothing angelic about these people, so maybe there’s no other way to describe them. Anyway, it seems the only one who has kept the faith is the archangel Michael (Paul Bettany), who directly disobeys God by protecting what he was sent to destroy: A pregnant young waitress named Charlie (Adrianne Palicki), whose child was prophesized to be humanity’s salvation. Upon finding her in a middle-of-nowhere New Mexico diner – named, appropriately, Paradise Falls – Michael leads a stranded group of strangers in an apocalyptic battle against the angels, who descend in droves.

What I find fascinating is that, for a film that comes across as nothing more than a violent, gory supernatural thriller, “Legion” tells a thoroughly absorbing story. I suspect few will latch onto this, since more time is spent on bloody shootouts and cornball dialogue; a basic shot consists of Bettany toting heavy artillery while someone over his shoulder swears loudly. Another basic shot shows a possessed person transforming hideously, and yes, this includes the overhyped scene of the old woman in the diner. And yet, in spite of all this, the subtexts are there, and there are moments of compelling character development.

Consider the relationship between Charlie and her boyfriend, a simple but decent mechanic named Jeep (Lucas Black); he wants to provide for her despite not being the father of her child, which she finds difficult to understand since she doesn’t believe herself to be all that good of a person. She has no plans for the future. She contemplated an abortion, and even in her eighth month of pregnancy, she smokes. “Why do you have so much faith in me?” she asks Jeep, as if to suggest that it’s wrong to care for someone who doesn’t have it together. “Am I another one of your lost causes?” Jeep then leaves, refusing to indulge a woman who spends every moment feeling sorry for herself.

Another important relationship is examined. Jeep and his father, Bob (Dennis Quaid), haven’t been getting along too well lately, although we quickly learn that Bob is really not a bad guy – he just doesn’t want his son making the same mistakes he made, mistakes that left him without a wife in a poor desert town working a dead-end job. Although he has difficulty showing it, he sees the good in Jeep and wants him to put it to better use than fixing cars in a rusty garage.

From Michael’s point of view, Jeep is a sign that, in spite of wars, injustice, bigotry, greed, and waste, humanity is indeed worth saving. But it won’t be an easy fight; even if Charlie’s child manages to be born, it will still be vulnerable to the archangel Gabriel (Kevin Durand), leader of the angel army on Earth. Unlike Michael, he believes that if God gives an order, it should never, ever be questioned. Needless to say, he and Michael are now enemies, although one gets the sense that, deep down, Gabriel wants to side with Michael.

I’m probably in the minority here, but I think that there are deeper aspects to “Legion.” I also think that they redeem the disappointing screenplay, parts of which seem to have been written by a potty-mouthed sixteen-year-old. Some of the worst dialogue is given to Quaid, who at times portrays his character as nothing more than a country/western stereotype. And then there’s Charles S. Dutton as a God-fearing veteran with a hook for a hand, who at one point recalls his father’s words of wisdom about dying before waking up. It wasn’t profound by any means, but the fact that he tried to make it seem like it was caught my attention.
Movie Content: 7/10

The print is presented in 1080p/MPEG-4 with a 2.40:1 aspect ratio. While the content of the film can be hit or miss depending on the viewer, the video department does not disappoint at all. Black levels are strong throughout the film as there are a lot of darker scenes. Black levels come off looking rather inky. Color is vibrant and bold in this transfer. Attention to details is one area that the print excels in and continually shows that Sony engineers have done an excellent job with their transition to high definition.
Video Quality: 9.5/10

The audio is presented in DTS-HD MA lossless 5.1 mix. The soundfield is immersive at all times no matter if it is the special effects or dialogue. I was quite impressed with the depth of the dialogue coming through the center channel. Dialogue was clean and clear with no apparent issues. This film has excellent usage of the rears. This is one film where the use of guns and heavy ammo take advantage of the soundfield. I felt a few times that a bullet was going to hit me or my wife as we were watching this film. .
Audio Quality: 9.5/10

“Legion” is not a great movie, and is not one that will go in the record books as being one. But I do think it’s better than some movies released of the same type of content. The only other film series which is similar to a degree and I have been hoping to release on Blu-ray in the future is “The Prophecy” with Christopher Walken. I would give this a rental if you are on the fence.
Overall Rating: 8/10