Posted in DVD Reviews by George Theofanopoulos on 21 October 2009 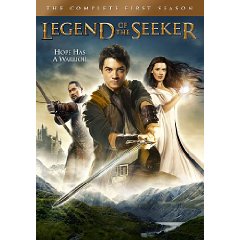 Explore a world of fantasy and mythology in the unforgettable epic adventure LEGEND OF THE SEEKER. There’s fun to be had in the sword-and-sorcery action sequences and magical effects, says Matt Roush of TV Guide. Take a coming-of-age journey with The Seeker as he joins forces with a mysterious woman and a wise, powerful wizard to combat Darken Rahl, the demonic sorcerer intent on taking over the world. In the ultimate battle between good and evil, who will answer destiny’s final call? Experience every episode of the fantastic first season, and discover how LEGEND OF THE SEEKER comes to life with exclusive, behind-the-scenes bonus features. TV’s most magical series is even more spellbinding on DVD!

If I was to look at this series just as a swords and sorcery science fiction show then I would be amazed. The storyline is rather good, and it works well for it’s episode by episode basis, with each episode being a story in itself, but belonging to a larger story that run through the entire season. The acting are decent, the special effects are not bad. Some have complained that she show is full of cliché characters and situations, and that is true, but I for one do not think that something being cliché automatically means that it is bad. Yes you have the pretty magic wielding heroine, the pheasant boy who discover a great destiny and a wise elderly wizard fighting a evil overlord with black hair, magic powers and red robes. Yes we have seen all this before, but there is a reason why this is imagery which have become so cliché, it works.

The storyline is rather basic, Richard a simple woodsman meet Kahlan a woman with a strange magical ability that allow her to take control of people’s minds, it turns out he is the Seeker, a sort of hero that show up every few generations to help the world when it is in great need and he joins Kahlan and the wizard Zedd on a quest to defeat Lord Rahl, a evil overlord that want to take over the whole world. But even if every fantasy fan have heard versions of this story before, it works well, the show is entertaining, and I find myself looking forward to next week and next episode when I see it. If I was to give this show a rating based on on itself, then I would give it four stars.

I could go on an on and list all the things that are changed in the TV series, but it would be more easy to list what is the same. Legend of the Seeker have as much to do with Sword of Truth as Disney’s The Little Mermaid have with the original fairytale. It has become a glossy, family friendly travesty.
Movie Quality: 9/10

If you like swords and sorcery TV series, then you will like this series. If you are a Sword of Truth fan and long to see the world you love come to life on your TV then you will wish to bang your head violently against a table. This is not Sword of Truth, period.
Overall Rating: 8.5/10