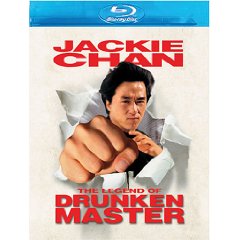 Jackie Chan was 40 when he stepped back into the role of young Wong Fei Hung in this sequel to his 1978 breakthrough comic hit, Drunken Master. In the ensuing years the character, one of China’s most popular folk heroes and a cinematic staple for decades, had been taken up as a quiet, introspective healer by Jet Li in the first three films in the fabulously popular series of films Once Upon a Time in China and in the more comic Last Hero in China. Chan returns Wong Fei Hung to the mischievous youth of the original film, an impetuous rascal with the skills of his healer/martial arts master father (Ti Lung of A Better Tomorrow) and the impulsiveness of his conniving, fun-loving mother (Anita Mui). Comic mix-ups and misunderstandings land Wong in the middle of a plot by British smugglers stealing Chinese treasures and enslaving local workers in an iron foundry. This mad mix of slapstick comedy, energetic action, and melodrama offers some of Chan’s finest fight scenes, a series of tightly choreographed, highly acrobatic skirmishes that build in intensity to the battle royal in the foundry where Wong dodges coal carts, parries sneak attacks, and crab walks through red-hot coals while taking on a succession of comers. Though 20 years older than his character, Chan pulls it off with grace, energy, and youthful vigor.

Jackie Chan lays out the best martial arts fight scenes ever made!Chan shows that he is, indeed, the “Master” of Drunken Boxing. I’m a big fan of his movies in general, because of the physicality of the fight scenes. They are masterfully choreographed, fast, and brutal. Contact looks real and powerful. The sword vs. spear fight in the beginning, the restaurant brawl (where Jackie takes on a legion of gangsters with a bamboo stick), and the magnificent 20 minute finale make this movie an absolute thrill ride.

While Jackie Chan is unquestionably the star of the show, Anita Mui puts on a hilarious performance and Ken Lo’s kicks are surreal. For those looking for a martial arts masterpiece your search has ended. This fight scenes are unrivaled, the comedy is a smash, and (surprisingly) the story has substance.
Movie Quality: 9/10

The print is presented in 1080p/VC-1 with a 2.34:1 aspect ratio. “Legend of Drunken Master” has to have one of the worst transfers on Blu-ray and high definition in general. The film is only 16 years old and I would have expected much more from this transfer. The image is rather muddy which gives this a very flat looking image. Black levels are not at their strongest here either. Details are not that great, as in some scenes details stand out and others they look downright terrible. I found print damage throughout the presentation with dirt and specks.  This is a huge disappointment in the video department doing this excellent movie a disservice.
Video Quality: 3/10

The audio is presented in English DTS-HD MA lossless 5.1 mix. Many will be disappointed here that the original Chinese language track is only available in Dolby Digital 5.1 mix instead of a lossless track. I do not understand why these studios continue to use a lossy track for films that have a foreign language track that is the original audio mix. During the action scenes there is quite a bit going on in the soundfield. Dialogue through the center channel was clean and crisp with no apparent issues.
Audio Quality: 6/10

While this film is great and one of the best from Jackie Chan, this has one of the worst transfers I have seen on Blu-ray. I hope that one day this does get an updated transfer. The complete lack of special features does not help this package at all. I have a hard time recommending this film to those with the DVD looking to upgrade.
Overall Rating: 5/10