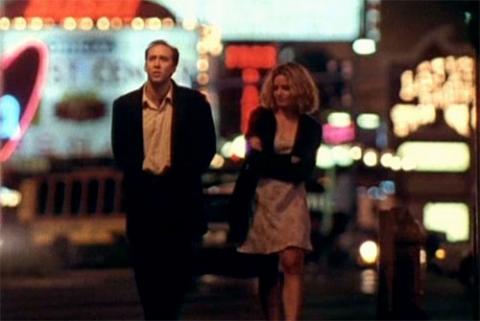 One of the most critically acclaimed films of 1995, this wrenchingly sad but extraordinarily moving drama provides an authentic, superbly acted portrait of two people whose lives intersect just as they’ve reached their lowest depths of despair. Ben (Nicolas Cage, in an Oscar-winning performance) is a former movie executive who’s lost his wife and family in a sea of alcoholic self-destruction. He’s come to Las Vegas literally to drink himself to death, and that’s when he meets Sera (Elisabeth Shue), a prostitute who falls in love with him–and he with her–despite their mutual dead-end existence. They accept each other as they are, with no attempts by one to change the other, and this unconditional love turns Leaving Las Vegas into a somber yet quietly beautiful love story. Earning Oscar nominations for Best Director (Mike Figgis), Best Adapted Screenplay (Figgis, from John O’Brien’s novel) and Best Actress (Shue), the film may strike some as relentlessly bleak and glacially paced, but attentive viewers will readily discover the richness of these tragic characters and the exceptional performances that bring them to life. (In a sad echo of his own fiction, novelist John O’Brien committed suicide while this film was in production.) The DVD features uncut, unrated footage that was not included in the film’s theatrical release. 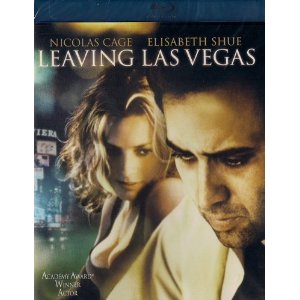 “Leaving Las Vegas” is a dark and tragic film that shows you how low you can fall and just how bad things can get. It portrays a dead-on picture of alcoholism and what exactly one goes through when they’ve hit rock bottom. As tragic as it is, this is a very beautiful and well-done film that keeps your attention to the bitter end.

Ben Sanderson (Nicholas Cage) is an alcoholic who has nothing left to live for but the very booze that seems to be the only happiness he can find. His friends want nothing to do with him and women are disgusted by him. After being let go from his job, Ben burns all of his possessions and moves to Las Vegas, where his only plan is to drink himself to death. In a short amount of time he meets Sera (Elisabeth Shue), a lonely hooker who has been through it all. An unexpected bond is formed between the two and love falls upon them that can only end in tragedy.

Boy, was this a hard movie to watch, but it was so well-done and executed. You are able to sympathize with both Ben and Sera, despite the paths they have chosen. Nicholas Cage was amazing and brilliant. No wonder why he won an Academy Award for his performance. You really buy into the fact that he is this sad character who wants nothing more but to destroy himself by the only thing that can bring him some sense of false happiness. Shue is also terrific in her role and should be applauded as well. The two are explosive as a team and can really bring the house down.
Movie Quality: 9/10

The print is presented in 1080p/AVC MPEG-4 with a 1:85:1 aspect ratio. ‘Leaving Las Vegas’ was a film that was shot with a low budget which does not translate well for future high definition offerings like Blu-ray. Colors are not that great providing a very dull looking image. This ends up hampering the black levels which are very inconsistent. Grain levels are rather high which can be intrusive. The print does carry some damage and dirt which some might find problematic.
Print Quality: 7/10

The audio is presented in a DTS-HD MA l0ssless 5.1 mix. This is not a mix that will blow you away, but the rears do provide several moments of excellent sounds from the soundtrack. While the rears do not get used all the time they do provide a decent amount of audio into the soundfield especially the jazz music. The dialogue is clean and clear through the center channel. This is a well balanced mix.
Print Quality: 8.5/10

“Leaving Las Vegas” is drama at its best. It’s heartbreaking, but at the same time is satisfying. It’s emotionally charged from start to finish. The writing is poetic, the acting is electric, and the directing is fantastic. Be warned, this is not a “feel-good” movie. It’s a portrait of harsh reality and it doesn’t go easy on you for a second. If you want a powerhouse drama that will keep you emotionally involved, this is the one for you. A terrific and amazing film on every front.
Overall Rating: 7/10