The legal thriller meets the serial-killer shocker in Law Abiding Citizen. The story begins when home invaders kill Clyde Shelton’s wife and daughter. The bereaved father (played by a thoroughly unsympathetic Gerard Butler) looks to slick Philly prosecutor Nick Rice (a low-key Jamie Foxx) to see that they receive the maximum sentence. Instead, the murderer, Ames, testifies against his accomplice, Darby, who gets the chair, while he gets 10 years. Upon his release, Ames’ mutilated body turns up in an abandoned warehouse, and all roads lead to Shelton. Rice attempts to defend him, but his client makes it impossible–Shelton wants to go to prison–so he does time, but then members of Rice’s legal team start to die. The attorney suspects Shelton, but can’t connect him to the crimes, so he races against the clock to save the lives of his assistant, Sarah (Leslie Bibb), D.A. Jonas (Bruce McGill), and his own wife and child. The movie may sound like a Yank reboot of the Japanese chiller Cure, in which an inmate kills from inside institutional walls, but plays more like a mash-up between The Silence of the Lambs, without the psychological complexity, and The Devil’s Advocate, without the cynical giggles. F. Gary Gray got his start with hip-hop videos and urban action flicks, like Set It Off, until he hit the big time with his remake of The Italian Job. Law Abiding Citizen is a disappointing muddle from a director who’s done better in the past and will surely do better in the future. 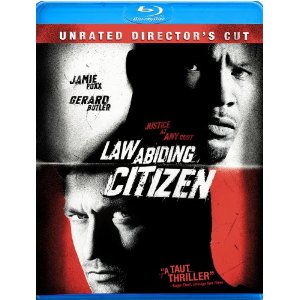 What do you get when you take the disturbed genius from Seven, the sadistically brutal revenge from Man on Fire, the attack and subsequent vigilante justice from the awesome Death Wish Collection, and the structure crashing desire for anarchy from Fight Club? The product is the immensely enjoyable action thriller Law Abiding Citizen.

When wealthy engineer Gerard Butler sees his family murdered as he lay helpless on the ground, anguish and pain rule his life. His lawyer, assistant DA Jamie Foxx, is a slick winner known for an extraordinarily high conviction percentage. Against his wishes, Foxx brokers a deal in exchange for testimony from one of the criminals. Predictably, the scumbag goes free early, and Butler is beside himself with disbelief when he sees his lawyer talking to the rat. Rather than go all “Time to Kill” on everyone, Butler decides to let the pot simmer deep inside. Fast forward ten years, and Foxx – now one step away from being the DA – must deal with a rich and vengeful Butler who has boiled over with rage at his misgivings with the U.S. legal system.

This is one of those movies perfect for viewers who shut their brains off, or for those who must question everything. For the former, there is nonstop action, plotting, and awesome revenge that rivals the best vigilante justice ever seen. Butler is perfectly calculating, displaying what a resourceful person can do with no other true goal in life but to exact revenge and pain upon those who have caused harm. For the latter, it’s an introspective look at crime, prosecution, and justice. Regardless of aspects that may be a little difficult to believe – but not quite Armageddon unbelievable – it definitely causes a viewer to evaluate the justice system flaws…while enjoying the Butler’s wisecracks and richly deserved revenge that every family member who has suffered through something like the actions of this movie’s killers.

From top to bottom this is a very entertaining movie. It’s not all explosions and shock scenes, nor is it a snoozefest. With great directing and acting, a concept with which most people can support, and a clever ending that is fair considering the protagonist dichotomy, it’s easy to root for each side of justice, and each character’s goal. And if that is possible, then the point being made in this film is successful. I highly recommend this film.
Movie Content: 8/10

The print is presented in 1080p/VC-1 with a 2.35:1 aspect ratio. The print looks very good throughout without any apparent issues. Colors are vibrant and carry pop which brings out the fine details. The detailed scenes stand out very well. Blacks are deep. I found the print to be crystal clear with no artifacts or print damage. The darker look and feel of the film looks great with the appropriate lighting making this film standout.
Video Quality: 9/10

The audio is presented in DTS-HD MA lossless 5.1 mix. This is a very immersive soundtrack during the action sequences. This is a film where there are a lot of action and chase sequences. Those looking for an audio mix that will take advantage of your equipment, this is the film for you. This is a very well done audio presentation that has dynamic range with the sound effects and a lot of panning from speaker to speaker. Dialogue is clean and crisp through the center channel.
Audio Quality: 9.5/5

If you want an action-packed and entertaining suspense movie of a new mold, Law Abiding Citizen is highly recommended. The Blu-ray includes a variety of cool special features and bonuses. You get the Unrated Director’s Cut with commentary and interviews. If there is one fault about this film, it has to do with the later act which I still recommend to leave your brain at the door.
Overall Rating: 8/10