Lars and the Real Girl Blu-ray 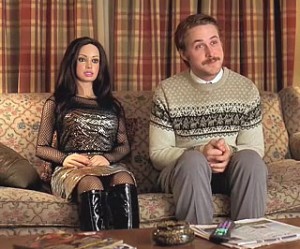 To some, Lars and the Real Girl will play as comedy; to others, tragedy. Though Craig Gillespie (Mr. Woodcock) allows Lars Lindstrom (a mustachioed Ryan Gosling, miles away from Half Nelson) a happy ending, the road is far from smooth. This rumpled Midwesterner couldn’t be more miserable. His brother, Gus (Paul Schneider, All the Real Girls), and sister-in-law, Karin (Emily Mortimer, Lovely and Amazing), fall over themselves to cheer him up, but Lars cannot be moved; he’s been like that since childhood. Then a porn-addicted co-worker hips him to the lifelike Real Doll. The next thing everyone knows, Lars has a new girlfriend named Bianca. She’s from Brazil, she’s shy, and she uses a wheelchair. She’s also made of silicon. (Because Lars is a devout Christian, hanky-panky is out of the question.) Since he’s finally emerging from his shell, his doctor, Dagmar (Patricia Clarkson), advises Gus and Karin to play along with the “delusion.” Soon the whole town, including Margo (Kelli Garner), who harbors a not-so-secret crush on her officemate, gets in on the action, forcing Lars to rejoin the human race or crawl deeper into psychosis. Written by Six Feet Under’s Nancy Oliver, Lars and the Real Girl is built around such a preposterous premise, it’s hard to know whether to laugh or cry. Fortunately, the actors play it straight. Gosling does his best to make Lars sympathetic, but Schneider and Mortimer, fully convincing in their concern, are the true heart and soul of this odd little film. 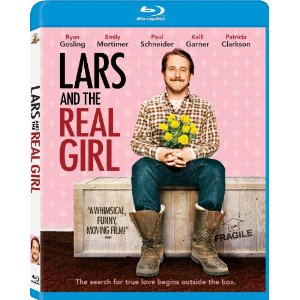 I will say the theme is trauma, of the childhood variety, and what it might require to heal, which means honoring the process on its own terms. For those who find the idea of a sex doll as a kind of talisman intervention ridiculous, you owe it to yourself to reconsider. You might begin by considering the common childhood phenomenon of the “imaginary friend”. And watch closely: there are after-all young adults who never strike us as maladjusted. but who are yet attached to their action figures and or certain stuffed animals.

While there is gentle humor here the fact that the film is being called a comedy by some strikes me as incredible (I actually consider it a minor flaw that at least one or two opportunites for lol humor were not exploited). The film is rather a sweet and for the most part non-sentimental drama…a meditation on healing and the human condition–especially the condition of growing up in a world where there are no official rites of passage. Try doing this as an adult who’s stuck in child trauma!

As a species of modern fable I find it more effective than other acclaimed fable-films that portray innocence like “Harvey” or “Being There” or most especially “Forrest Gump”. I always wind up throwing up… my hands due to what I consider bad aesthetics, a nauseating or incoherent blend of realism and fantasy. With “Lars” the fable elements are subtly implied and never rise more than a few millimeters above real-life believability, even if some will find it hard to believe that things develop the way they do.

On the minus side I think the film suffers somewhat from a creative self-consciousness that if not exactly preening is still a bit too self-congratulatory. For those who discern ideology at work–of let’s say the Clintonian ‘It Takes a Village’ variety, I would only remind you that this is a small town, and in this sense could be read as a defense of the intellectual conservative tradition which has historically been on the ‘small is beautiful’ end of the argument.
Movie Quality: 8.5/10

The print is presented in 1080p/AVC MPEG-4 with a 1:85:1 aspect ratio. Picture quality is very good for this film as you can see the detail for example of Bianca (the doll) and just the overall atmosphere (in this case, the majority of the film was shot during the winter). Skin tones are natural, blacks are nice and deep and I saw no signs of compression artifacts, dirt or any speckles. Also, there is a good amount of grain throughout the film.
Print Quality: 8.5/10

The audio is presented in a DTS-HD MA l0ssless 5.1 mix. This is not an audio mix that you will go in expecting huge things from the soundfield as it is primarily a dialogue driven film. The dialogue is clean and clear through the center channel with no apparent issues. I was rather happy with the way the film sounded considering that this was more of a dialogue centric film.
Print Quality: 8.5/10

“Lars and the Real Girl” was a film that went under the radar because it only received a limited release in theaters. But it will probably be one of the most unusual love stories that you will ever see in your life and one that you will probably never forget.
Overall Rating: 7.5/10