Posted in DVD Reviews by George Theofanopoulos on 24 December 2008 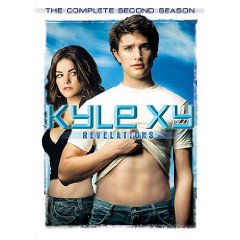 For those who so thoroughly enjoyed Season 1 of Kyle XY, Season 2 continues the story with some new twists and new characters, while wrapping up loose threads from Season 1. After the death of his mentor, Adam Baylin, Kyle (Matt Dallas) returns to the Trager family, who keenly felt his absence.

In season two (a full 23 episodes compared to the opening season’s 10), Kyle’s continues to study under Adam Baylin (J. Eddie Peck) who teaches Kyle about his otherworldly powers, like mental telepathy, and provides further clues about his origins. The crucial one being that Adam wasn’t born, but created in a lab. The experiments led to a 13-month human gestation – Adam Baylin. Feeling isolated, Adam continued the experiments through a company called Zzyzx. This led to two subjects, a male and a female who were kept in gestation chambers for their entire lives. Zzyzx went unethical, however, and Adam had to go into hiding. Zzyzx ordered Kyle terminated, but Foss got him out.

Carried over from last year are the domestic issues of the Tragers. I like these characters; they’re intelligent and aren’t just props for Kyle to interact with. But Kyle helped the kids learn how to be Better People last year. So there’s not as much potential in the Trager B-plots anymore. Moreover, their obsession over Kyle being gone during the premiere (Nicole and Declan, I’m talking to you) burned some good will with me. I wanted to tell them to get a life.

As mentioned earlier, I really enjoyed the character dynamics and how everyone just really works well with each other. I don’t think I’ve been this giddy by a youthful sci-fi drama series since “Buffy the Vampire Slayer” and it was one of those series on which I couldn’t stop watching each episode on DVD one after the other. Overall, a fantastic series on DVD. This DVD set of “KYLE XY” is loaded with special features that I’m sure fans of the series will definitely be thrilled about. Highly recommended!