Posted in DVD Reviews by George Theofanopoulos on 05 December 2009 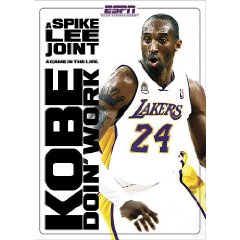 Spike Lee calls the shots as he takes you up close and personal with Kobe Bryant the NBA’s most valuable player of 2008. Experience unlimited access as 30 cameras follow Kobe’s every move in the single most important match up of the 2007-08 season. Mic’ed to hear his every word, Kobe puts his leadership skills to the ultimate test as the Los Angeles Lakers take on the San Antonio Spurs for the Western Conference title lead. From locker room prep and strategy talks to the dynamic action of the big game itself, Kobe Doin’ Work is the NBA superstar as you’ve never seen him before, insense, uncensored and totally real!

Usually, these type of coverage is censored for television but for this DVD, you get the full uncensored version, the broadcast censored version and also a no commentary version. And I think that Kobe Bryant said it best of what he thinks about this film and that is, during a post-game interview, he tries to explain the team dynamics. But through this film, you get to learn how the technical part is done on court. You hear Kobe directing the teammates, knowing when to get in the head of his opponent, switching plays in order to get his teammates into the groove.

So, basketball players can definitely look at this DVD as really instructional. Coaches can definitely showcase this DVD to their players and have them learn from it. And for the casual viewer, it’s just an up-close, personal look at one of the greatest athletes today.

Really, there’s nothing I can complain about this DVD release. If anything, I think there will be more demand for Spike Lee or others to continue this up-close look at how athletes are during the game. Granted, I’m sure some organizations and coaches do not like to give that much access to the viewer of play call discussions but Kobe Bryant addresses it during his commentary saying that basketball is unlike other sports because opponents are going to know what the team is going to do, but it’s all about how the play is executed.
Movie Quality: 9/10

Overall, I’m sure Lakers fans will love this release but this is not just for Lakers fans, this is for basketball fans especially those who aspire to be on team, those who want to be better on the basketball court and to learn how leadership is carried on the court and also out from one of best basketball player of all time.
Overall Rating: 8/10