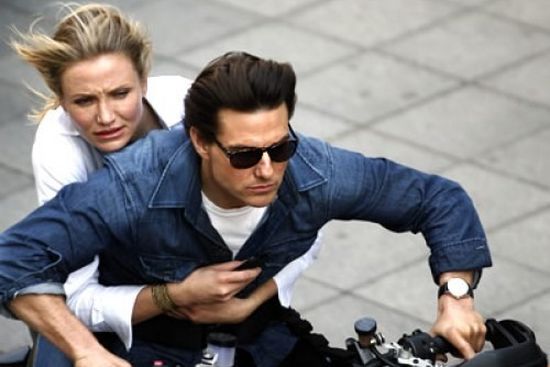 Knight and Day has action by the boatload, cheeky wit, unexpected double-crossing, sexual tension, and the blinding smile of its star, Tom Cruise. In short, what more could you ask of a rollicking good-time movie? Knight and Day, which also stars the irresistible Cameron Diaz as Cruise’s superspy’s ultimate foil, channels the best elements of earlier films like Mr. and Mrs. Smith, Mission: Impossible, the Bourne films, and even a little of Duplicity’s sophistication. Mostly, though, Knight and Day is about moving things along merrily, if not completely coherently, as the two stars tangle, and tussle with trust issues, in a completely believable, compulsively watchable way. Cruise plays Roy, an on-the-lam spy (who may have had some kind of psychotic break–or who may in fact be the only person telling the truth); he runs into the winsome June (Diaz), who gets caught up in Roy’s mad dash to escape the cabal of federal agents on his tail. “No one follows us,” Roy announces to a terrified diner crowd as he moves to make his escape with June, “or I kill myself–and then her.” While Knight and Day, directed by James Mangold, has more than its share of high-speed chases, hails of bullets, and explosions, it works far better as a romantic comedy–for the chemistry between Diaz and Cruise is delicious, palpable, and believable. So grab a date and an extra-large popcorn, and get ready for a sweet and fun Knight and Day. 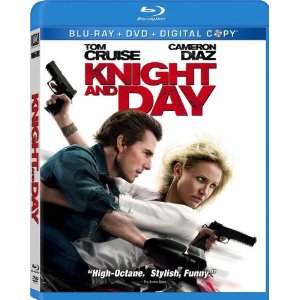 Tom Cruise became an action star in his own right in the 90s. He wasn’t the typical strong, burly gun-toting heavy that earned the reputations for Sylvester Stallone, Bruce Willis, or Arnold Schwarzenegger; instead, Cruise played an action hero closer to a character whose real talent was putting the pieces together and then surviving the high-octane chase filled with explosions, trains, motorcycles, and helicopters that would inevitably follow. He’s proven himself a versatile actor across the genres, but Knight and Day sees him returning to his Mission: Impossible glory days and the nostalgia proves to be bittersweet.

The life of June Havens (Cameron Diaz) takes a long series of unexpected twists the day she becomes the focus of secret agent Roy Miller (Tom Cruise) on a mission he learns he wasn’t supposed to survive. But he did and now has in his possession the key to renewable energy that could potentially change the world forever, but he has to get it into the right hands. Or does he? Or maybe he’s a thief and stole it from a top secret government lab. Maybe he intends to sell it to the highest bidder. Maybe he wants nothing but to earn a quick billion off the energy source and retire to a secluded island. These are the lies and truths June must sort through as she’s taken on a whirlwind ride around the world as Roy’s hostage/accomplice. As much as June would like to run, the world of spies has dangerous people at every turn and she never quite knows who to trust.

Or, at least, that was the objective of the film. The idea was for all of the ups and downs June faces throughout the day to leave the audience constantly guessing. Is Roy a lunatic? Is he unhinged? Can he be trusted? Whose side is he really on? We’re supposed to ask these questions, but neither the script nor Director James Mangold have the force to keep the momentum going on the uncertainty. The entertainment factor benefits from Cruise getting to play a zany, off-the-wall kind of role, and Cameron does well enough screaming in comical despair as she tries to sort out the secrets amidst plenty of flying bullets-but Knight and Day never reaches the heights of a solid spy thriller. It’s just amusing enough to not be a waste of time, but not enough to be memorable.
Movie Content: 8.5/10

The print is presented in 1080p/MPEG-4 with a 2.40:1 aspect ratio. Colors are especially vibrant through all the various shooting locales whether it be the lush greenery on Miller’s hideaway island, the sunny baked oranges of Spain, or even the plain hometown humdrum of Boston. As a result of these changing color palettes skin tones range somewhere between normal and “deceptively tanned.” It’s no distraction by any means, though, thanks to the presence of a very fine layer of film grain, which is most noticeable in outdoor shots. Saturation also tends to be a little on the hot side (most notably when actors are directly exposed to sunlight), but I think it makes the settings feel more realistic. Black levels are deep and provide a good amount of shadow delineation between intricately-lined fabrics, stage props (particularly guns), and body shapes in the dark. Meanwhile, contrast provides just enough brightness to compliment everything else making for a very clear picture. Image detail is sharp and I’m pleased with how much depth there is (again with Diaz wearing that bikini).
Video Quality: 9/10

The audio mix is presented in DTS HD 5.1 Master Audio lossless track. The score by John Powell (which is ironically reminiscent of his work in the Bourne films) plays and separates itself into the fronts and rears with a just a little bit of bass in the rhythm, while the fisticuffs and weapons give off all kinds of directionality. Martial arts counterattacks, the whiffing of clothes, and connection of hits provide a good, loud smack across from left to right, right to left and seat belts and grazing knives whiz and whip around with tense authority. There’s a little bit of gunfire that’s doused out by the muffling of suppressors, but they still provide some excellent bass thumps and ricochet from the sides to and around the rears. Dialogue is clear and discernible from the center channel as Roy and June make for an interesting exchange of chit-chat and stories. If anything the only downside to this lossless track is the quietness during the non-action scenes, but that’s more a result of the narrative, which would obviously be case since it’s still a romantic comedy.
Audio Quality: 9/10

Tom Cruise and Cameron Diaz work well together. The film had a good pace to it and it was rather plausible. I recommend it for a good DVD movie night for everyone.
Overall Rating: 8/10