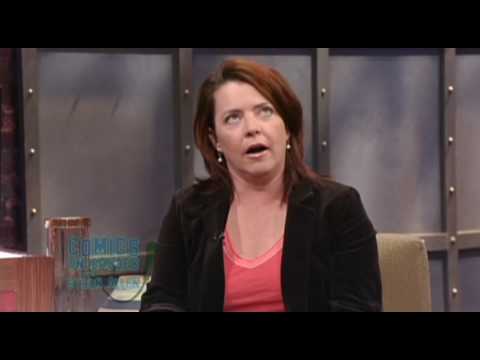 Finally, a comedian who isn’t whining, insulting or self-loathing. Kathleen Madigan is just brilliantly funny and is still, after 20 years in the business, actually having fun. In this hilarious stand-up special, shot at the Gramercy Theater in New York City, Kathleen takes on politics, American culture and her family who has given her full permission to sell them down them down the river. Winner of the American Comedy Award for Best Female Comic, Madigan has been seen over 12 times on The Tonight Show, The Late Show with David Letterman, The View, Dr. Phil, ESPN, The Joy Behar Show and has had her own specials on HBO and Comedy Central. Madigan was the only comedian in the history of NBC’s Last Comic Standing to go unchallenged by any other comedian. She lives in Los Angeles but spends inordinate amounts of time with her family in the Missouri Ozarks. 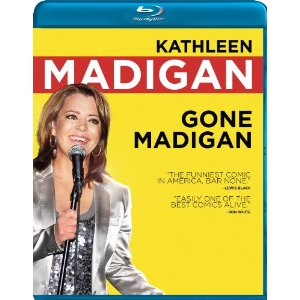 Kathleen Madigan is absolutely hilarious! Is she politically incorrect? Of Course!! Is she crude and vulgar? No!!.. Coming from a large Irish Catholic family from St Louis,Missouri.. I found her observations and dry humor to be refreshing. Yes…she is irreverent… and takes on everything from California healthy living..Wee people in Ireland … her parents and siblings.. a tour of the Mormon temple… she hits such a variety of topics but didn’t miss a beat on any of them.

Beware … she is a democrat and she does think.. so if you find either of those threatening or offensive this is not your cup of tea. Otherwise… get ready for a very entertaining stand-up set with a very intelligent lady who has just a little different twist on life!!.

After first ingratiating herself with the audience by acknowledging her perennial obsession with using WebMD to self-diagnose her imaginary diseases, Madigan notes that, much like Black, she has gone overseas several times to entertain the troops. In fact, Madigan and Black usually go on the same USO Tours together. Whereas Black talked on his most recent DVD about a gig on which they shared the bill with Vince Gill, Madigan poked fun at sharing bunk beds and troop visits with Kellie Pickler. “Kellie’s hilarious, but she doesn’t know why,” Madigan noted. More impressively, Madigan took a look at the cityscape of Afghanistan, and after receiving a military briefing about how much American efforts have improved it, observed: “That’s amazing. When we’re done, we should invade Detroit!”

Madigan, who grew up in and has family in St. Louis, also wondered about how many people signed up for the National Guard after seeing a TV ad and imagined they’d be stuck in Afghanistan, or Iraq, or Bosnia. “That is good for Bosnia, but who the fuck is guarding Missouri?”

Kathleen Madigan: Gone Madigan will provide enough laughs for her fans and even those that have never heard any of her material before. If you are a fan of comedy I would recommend you give this a shot for some laughs.
Overall Rating: 7/10