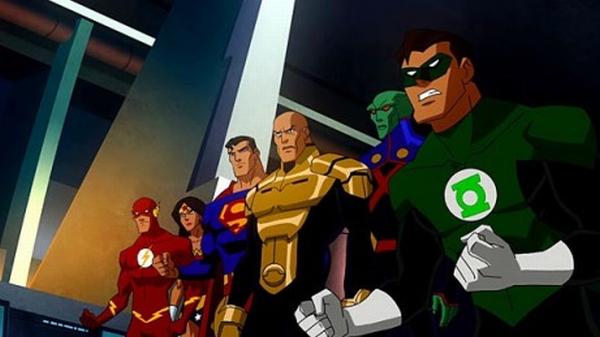 In a parallel Earth ruled by the Crime Syndicate, the Justice League must fight their evil doppelgangers in a battle that would be dead even, except that their malicious counterparts are willing to do the one thing Batman and Superman never would: kill. 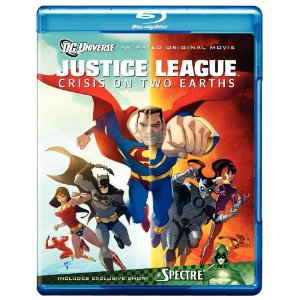 I just finished watching the newest of the DC Universe Animated Original Movies, Justice League: Crisis On Two Earths. Though this is the 7th movie that they’ve produced, it is only the 4th film that I have fully enjoyed. The others being Justice League: New Frontier, Batman: Gotham Knight and Wonder Woman. These are the DCU productions that I really have not had any complaints about.

A quick synopsis of the film. On a parallel Earth in an alternate universe, all of the superheroes we know are evil, and all of the super villains we know are good. The only remaining survivor of this Earth’s Justice League is Lex Luthor. He travels to what we know as our Earth to enlist the aid of our favorite superheroes. After agreeing to help, they travel back to good Luthor’s Earth and begin battling the Crime Syndicate, made up of our heroes evil counterparts. That’s all I will say because I know that I hate spoilers so I assume you all do as well.

With voice talents such as William Baldwin and James Woods, voice direction by Andrea Romano (Batman: The Animated Series, The Boondocks), a script by Dwayne McDuffie (Justice League, Justice League Unlimited), produced by Bruce Timm (Batman: The Animated Series, Batman Beyond) and being directed by Sam Liu (Superman Batman: Public Enemies) and Lauren Montgomery (Wonder Woman, Green Lantern: First Flight), this certainly made up for my disappointment in Superman Batman: Public Enemies.

None the less, every film that the DCU has produced up to this point is worth seeing. I didn’t like all of them but perhaps some of you will, and with the way things are going, their next films may just continue to get better. One can only hope but for now I will continue buying and watching the DC Universe Animated Original Movies!
Movie Content: 8.5/10

The print is presented in a 1080p/VC-1 codec with a 1.78:1 aspect ratio. The print looks like an upconverted DVD. Colors are rich and bold throughout, but with a very hot look to the colors. The animations do not come off as impressive as some of the previous releases. Animations do not feel fluid at times and then the background looks like a cardboard cut out at times. I am not too sure what happened here with this release, the video is lacking.
Video Quality: 6/10

The audio is presented in Dolby Digital 5.1 mix. While this film is not going to shake the room or shatter your windows, it does an excellent job providing a rather crisp sound. The dialogue is at the right mix which sounds very clear. The soundtrack does sound good and the sound effects are also great but are a bit on the lighter side.
Audio Quality: 7/10

DC fans are gonna love this film, especially with all the surprises that are thrown in. You are going to see a few additional familiar faces and a few new faces that are going to make love it even more. I was rather disappointed with the video and audio presentation for this blu-ray. If you are a fan, then give this a rental at the most.
Overall Rating: 7/10