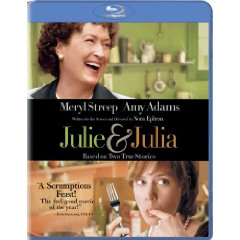 Julie & Julia is based on the book by Julie Powell, a frustrated New York bureaucrat who wants to be a writer. “But you’re not a writer until someone publishes you,” she moans. So she gives herself a challenge: to cook her way through Julia Child’s Mastering the Art of French Cooking in one year, and to blog about it. As Powell (played with chirpy determination by Amy Adams), begins to find her groove as a cook, and her voice as a writer, the project takes on a life of its own–and in the end it does provide the struggling young woman with her life’s purpose, to her very pleasant surprise. But mostly, Julie & Julia is a valentine to Child, to Child’s amazing love affair with her dashing husband, Paul (Stanley Tucci, as divine as any soufflé in the film), and to her outlook on embracing life, and ordering seconds. Streep throws herself into the Child role with real affection for her character, and while certain of Child’s idiosyncrasies–including her warbly voice and unflappable haphazardness in the kitchen–are retained, it’s Child’s character and vision which form Streep’s portrayal, and which make the film so involving and rewarding.

Meryl Streep does a wonderful job portraying Julia Child and showing a side of her personality most people would likely not know to have existed. My mother told me when she watched her on TV she didn’t show personality like she did on this movie. Learning about how she came into cooking, later in her life & after her marriage, gave a new perspective on her cooking style and her famous french cookbooks (which I just ordered the hardcover set due to my desire to replicate many of delicious cuisines shown in the film). I have to say true french restaurants & cuisine is hard to find where I live, so I can’t say I have longed for it or known how to make it — but now I can’t wait to try it out.

In truth, the movie is mostly about Julie, played by Amy Adams, who plays an average American woman who hates her job and lives in a less-than-desirable apartment with her husband over a pizza place. Amy Adams portrayal of Julie makes her annoying and aggravating at times, but for the most part an adventurous character wanting to figure out how to give her life meaning. Julie’s relationship with her husband is sometimes very similar to Julia Child’s relationship with her husband; however, throughout the film there is a significant difference between their relationship likely related to the difference in age, experience, and ultimately what the movie is about – Julie’s need to define herself and figure out how to change her life..

The print is presented in 1080p/AVC MPEG-4 with a 1.85:1 aspect ratio. The print looks very good throughout without any apparent issues. Colors are vibrant and carry pop which brings out the fine details. The detailed scenes stand out very well. Blacks are deep. I found the print to be crystal clear with no artifacts or print damage.
Video Quality: 9/10

The audio is presented in Dolby TrueHD 5.1 mix. This is not an audio mix that you will go in expecting huge things from the soundfield as it is primarily a dialogue driven film. The dialogue is clean and clear through the center channel with no apparent issues. I was rather happy with the way the film sounded considering that this was more of a dialogue centric film.
Audio Quality: 9/10

Meryl Streep has been on a role the last year with some phenomenal performances, and “Julie & Julia” is no exception. Both the video and audio presentation is great for a film of this genre. “Julie & Julia” is a highly recommended film.
Overall Rating: 8/10