Journey of the Earth DVD Review

Posted in DVD Reviews by George Theofanopoulos on 03 June 2013

Journey of the Universe is an epic documentary exploring the human connection to Earth and the cosmos, from producer-directors Patsy Northcutt and David Kennard director of Carl Sagan s Cosmos and Hero s Journey: The World of Joseph Campbell. Big science, big history, big story, this one-of-a-kind film was created by a renowned team of scientists, scholars, and award-winning filmmakers, led by co-writers Brian Thomas Swimme, the acclaimed author and evolutionary philosopher, and Yale University historian of religions Mary Evelyn Tucker. They weave a tapestry that draws together scientific discoveries in astronomy, geology, biology, ecology, and biodiversity with humanistic insights concerning the nature of the universe. 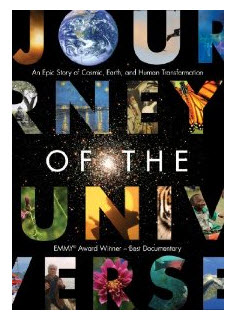 Journey of the Universe tells us of a voyage, a unique 14 billion year ongoing expedition where we, as humans, now stand at the crossroads playing the integral role of potentially controlling how the ensuing chapters shall progress. Journey of the Universe is a story of science. It is the story of history, of memory and of future. It is equally the unfolding story of the humanities.

Journey of the Universe is an epic tale told through hundreds of thousands, and millions of millions of little tiny stories that are being told all at the same time. It is a self-energizing tale of process, and an accounting of self-awareness; not just of the self-awareness of humankind, but the self-awareness that each living cell of each plant of each life form has inherent within it. It is animal to land, land and water to atmosphere, plants to air, earth to sun, solar system to universe and so on. It is the tale of the weaver, and of the knitting of each element to the other that then becomes the story itself unfolding.

Journey of the Universe is the evolution of childhood, of shared, self-amplifying and symbolic consciousness. It is the story of becoming human. And while Journey of the Universe is an epic film, it also asks a titanic question, for it peeks at the control we exert on our surroundings and asks you to consider if we, as a race, properly govern and correctly steer toward our collective future or are we fatally injuring the very thing we need and cherish most?

Journey of the Universe asks us to transform everything we thought we knew into something fresh and exciting. It tells that us we can. It inspires us to do so. It explains in a language all can understand that we are the stars, the nourishment, the passion and the creativity, and we are living the dream as we dream it.

Journey of the Universe is the story of knowledge unfolding, and Brian Swimme is the storyteller who captured me from the opening line.
Overall Rating: 9/10