Posted in DVD Reviews by George Theofanopoulos on 23 September 2009 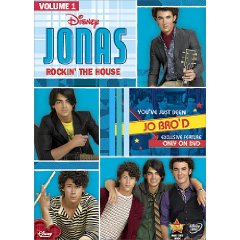 Kevin, Nick and Joe are three guys facing the same challenges as teenagers all across America — the only difference is they are also internationally famous rock stars in the band JONAS! Experience life through the eyes of the world’s most popular trio in five episodes of JONAS on JONAS: ROCKIN’ THE HOUSE. Plus, this DVD includes two full bonus episodes and premieres the exclusive You’ve Just Been Jo Bro’d DVD feature that takes you along with the Jonas Brothers on their laugh-out-loud mission to surprise their co-star. Get ready to see even more of your favorite Disney Channel series with JONAS: ROCKIN’ THE HOUSE on DVD!

Groovy Movies:
The three brothers are planning to swtich all their home movies over to DVD for their mom’s brithday. Instead they accidently ruin their mom’s tapes but come up with a way to fix it for her instead! The boys with obviously do anything for their mom and the videos they make are the funniest things! Plus you get to watch real life Jonas home videos.

Wrong Song:
Nick falls in love too fast with this girl who he is teaching guitar to. He writes her a song and then she uses that song for her performance and dedicates it to another guy! This episode is okay. Nick’s acting is a little stiff, probably cause this is the first episode. He loosens up in later episodes and has a better subtle acting that is hilarious. The girl in this is very annoying and shows the future of what the girls are going to be like on this show.

Band’s Best Friend:
Joe’s friend Carl is coming to stay for a few days and all he can think about is that the Jonas’s are rock stars now.

Chasing the Dream:
The boys need a new backup singer and Macy gets Kevin to let her do it.

Although I had not heard their music the show did seem to have promise. I watched the first episode as I heard it was like the Monkees I watched as a kid and my daughters love the Jonas Brothers. Fans will be happy with this set.
Overall Rating: 7/10