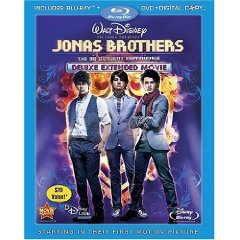 The excitement of seeing the Jonas Brothers live in concert is hard to beat, but this concert presentation is the next best thing to being there. Basically a collection of highlights from the Burnin’ Up concert tour, the film features live concert footage of hit songs including “That’s Just the Way We Roll,” “Gotta Find You, “Video Girl,” “S.O.S,” and “Burnin’ Up” with pyrotechnics, water effects, and the occasional questionable harmony and out-of-breath lyric. Demi Lovato joins the Jonas Brothers for “This Is Me,” Taylor Swift presents “Should’ve Said No,” and Big Rob even makes a brief singing appearance. Also included is the never-before-released song “Love Is On Its Way.” Viewers get the best seats in the house thanks to a nice mix of up-close, on-stage, and above-stage camera angles combined with wider crowd shots. Augmenting the experience is just the right amount of backstage footage of the Jonas Brothers doing everything from waking up in the morning to braving the screaming crowds of fans at midnight on album release day and even changing clothes between concert sets. This film is very similar to Hannah Montana’s Best of Both Worlds Concert, in which the Jonas Brothers’ made a guest appearance, but this production offers somewhat improved sound and better transitions between concert and backstage footage. (Ages 7 and older).

Needless to say, when it comes to idol-based music films or concerts, they are literally targeted towards their fandom and demographic. Those not familiar with the Jonas Brothers or care for their music are probably not going to have much of an interest in the film. But for those who do enjoy the group’s music, ‘Jonas Brothers – The 3D Concert Experience’ is actually an enjoyable release. First off, you get four 3D glasses and you can enjoy the film in either its 3D or 2D presentation via Blu-ray. You get the DVD and a digital copy for a total of 3-Discs.

The following songs are featured in ‘Jonas Brothers – The 3D Concert Experience’:

I would highly recommend this to any Jonas Brothers fan who can’t get enough of them. Knowing how expensive (and coveted) their concert tickets are, this gives you a behind the scenes, front row thrill.
Movie Content: 8.5/10

The print is presented in 1080p/AVC MPEG-4 with a 1.85:1 aspect ratio. Quality is a non-issue during the 3D portion but for the 2D portion included, the film is quite vibrant in colors. As mentioned above, there is a lot of lighting in this concert and colors really come out quite well in this film. If there is one thing that I’m always confident from a release from Disney, every Blu-ray release has had solid picture quality and this film is no exception.
Video Quality: 9/10

The audio is presented in DTS-HD MA lossless 7.1 mix. So you have the front channels delivering the music and vocals. The rear surrounds delivering the audience. Great use of LFE as my subwoofer was being used during the concert. It’s an immersive soundtrack and if I had to really nitpick, I wish the explosions had a little more kick but overall.
Audio Quality: 9/10

I am not a fan of the Jonas Brothers anything, but I will hand it to Disney for doing another excellent job with this release on Blu-ray with excellent audio and video. Fans will not be disappointed at all with this release.
Overall Rating: 9/10