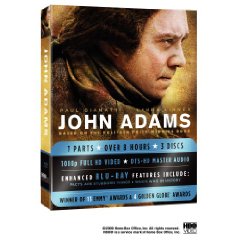 Based on David McCullough’s bestselling biography, the HBO miniseries John Adams is the furthest thing from a starry-eyed look at America’s founding fathers and the brutal path to independence. Adams (Paul Giamatti), second president of the United States, is portrayed as a skilled orator and principled attorney whose preference for justice over anti-English passions earns enemies. But he also gains the esteem of the first national government of the United States, i.e., the Continental Congress, which seeks non-firebrands capable of making a reasoned if powerful case for America’s break from England’s monarchy. The first thing one notices about John Adams’ dramatizations of congress’ proceedings, and the fervent pro-independence violence in the streets of Boston and elsewhere, is that America’s roots don’t look pretty or idealized here. Some horrendous things happen in the name of protest, driving Adams to push the cause of independence in a legitimate effort to get on with a revolutionary war under the command of George Washington. But the process isn’t easy: not every one of the 13 colonies-turned-states is ready to incur the wrath of England, and behind-the-scenes negotiations prove as much a part of 18th century congressional sessions as they do today.

Besides this peek into a less-romanticized version of the past, John Adams is also a story of the man himself. Adams’ frustration at being forgotten or overlooked at critical junctures of America’s early development–sent abroad for years instead of helping to draft the U.S. constitution–is detailed. So is his dismay that the truth of what actually transpired leading to the signing of the Declaration of Independence has been slowly forgotten and replaced by a rosier myth. But above all, John Adams is the story of two key ties: Adams’ 54-year marriage to Abigail Adams (Laura Linney), every bit her husband’s intellectual equal and anchor, and his difficult, almost symbiotic relationship with Thomas Jefferson (Stephen Dillane) over decades. Giamatti, of course, has to carry much of the drama, and if he doesn’t always seem quite believable in the series’ first half, he becomes increasingly excellent at the point where an aging Adams becomes bitter over his place in history. Linney is marvelous, as is Dillane, Sarah Polley as daughter Nabby, Danny Huston as cousin Samuel Adams, and above all Tom Wilkinson as a complex but indispensable Ben Franklin.

A wonderfully honest and moving rendition about John Adams and his devotion to the creation of the United States of America. I am glad to see a story about our founding fathers told in the most genuine manner. These were a bunch of men who fought for an ideal, and how much their ideal has changed “the course of human events”.

This film puts everything we’ve learned in the history books into perspective and gives it life. All those times we crammed for a history test, trying to remember dates, who crossed the Delaware, who was the first, Who was the second? Who signed this? Which document did what? Somewhere over the years, we’ve managed to reduce a significant event to a bunch of dates and numbers.

As David McCollough said, “History is about life,” and grateful for him bringing back that resonance to John Adams and history itself. The more we remember that “history is about life,” the more we remember what it’s like to aspire to great things. We are not a mundane people. Our country was never founded on nonsense. We ought never to forget that. “O’er the Land of the Free, and the Home of the Brave” — Can you blame Francis Scott Key for being moved?
Movie Content: 9/10

The print is presented in 1080p/VC-1 with a 1.78:1 aspect ratio. This mini series is a bit disappointing on Blu-ray provide it that HBO has had some excellent release in high definition. This actually turns into an inconsistent image throughout. At times I found the visuals to look really good with some excellent details. Then the details take a dip which hurts the image. The color palette holds up rather well with a strong presentation. Black levels are hit or miss as they are strong in some scenes and lacking in others. There is also some edge enhancement which may detract those that dislike EE. Those that own the DVD set may remember the apparent grain, which is pretty much cleaned up with this set. This print is much better than the DVD, but nowhere near HBO’s quality of Blu-ray releases.
Video Quality: 8.5/10

The audio is presented in DTS-HD MA lossless 5.1 mix. The films special effects really takes advantage of the soundfield immersing the viewer. The rears get a fairly good work out with a dynamic sounding experience. I couldn’t believe how dynamic the sound effects and the soundtrack were across all surrounds. I felt like I was a part of each marching band the audio pulled me in so well. Dialogue is well balanced and very clean. The sound here totally makes up for the inconsistencies with the image.
Audio Quality: 9/10

All special features are presented in high definition and are ported over from the DVD set.

I actually enjoyed ‘John Adams’ more than I thought. HBO continues to churn out excellent mini-series after another. While the video presentation lacks a bit, the audio picks up the slack. Fans will be excited to hear that the special features were ported over. This is a worthwhile upgrade to Blu-ray albeit a few print issues.
Overall Rating: 9/10