Posted in DVD Reviews by George Theofanopoulos on 04 August 2009 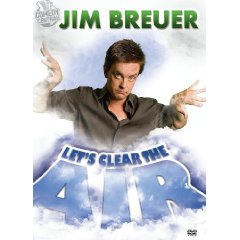 One of the “100 Greatest Stand-Ups of All Time,” Jim Breuer joined NBC’s Saturday Night Live in 1995. Since then he went on to star in several movies, tour the country with his Heavy Metal Man and Family Man comedy tours, and host a daily radio show on Sirius Satellite Radio called “Breuer Unleashed.” You may remember Jim as the infamous Goat-Boy from SNL, or his stoner persona from the cult hit Half Baked. Now he’s clearing the air with this concert event, chronicling his transformation from childhood to the ultimate family man.

The DVD is jam-packed with extras. The fireside chat with his father is hilarious as always, the photo shoot was pretty cool, and the DVD menus are UNBELIEVABLY FUNNY!!!!!

Jim’s new content is excellent touching base with what any middle aged dad, son or husband can relate too. He clearly has grown in life and his new special showcases that in a style that only Jim Breuer could supply.
Movie Quality: 8/10

This new show is really great, its Jim but in a whole new, matured package. He really does clear the air and moves beyond the stereotypical style he sometimes is overly known for (pot head).
Overall Rating: 8/10