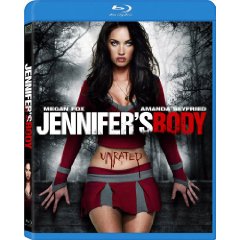 Sexy temptress Megan Fox is hotter than hell as Jennifer, a gorgeous, seductive cheerleader who takes evil to a whole new level after she’s possessed by a sinister demon. Steamy action and gore galore ensue as the male student body succumbs to Jennifer’s insatiable appetite for human flesh. Now it’s up to her best friend (Amanda Seyfried) to stop Jennifer’s reign of terror before it’s too late!

Jennifer is outgoing and sexy and has every male wrapped around her little finger in the town of Devil’s Kettle. She and her friend, Needy, our narrator and scorekeeper, tells us just how great of a person she is, too, and just how much we should like her. And why not? In a town named after a waterfall and a very odd tidepool, there isn’t much to do or uch to consider. So, Jennifer and the way she looks matters – even if she is a little on the mean side sometimes. Things begin to change for both of the girls when they go to see a band called Low Shoulder, however, and especially after the accident happens and Jennifer leaves with the band. Yes, Jennifer goes through a lot of growing pains – the kind that makes snacks out of people and makes a little town cringe – and this makes Needy wonder about her friendship and what steps need to be taken next.

When you first look at this movie, you may think that it will be filled with nudity and a lot of suggestive material instead of horror. In a way the suggestive part is right, but only insofar as it empowers the dynamics of the horror movie. In fact, I was surprised by how good this movie really was, expecting only a few cheap laughs and some horror and instead getting great effects, a lot of laughs, and a pretty funny storyline. I also knew a lot from the advertising I had seen – especially when it came to the eating people part – but I didn’t expect it to be so bloody or so funny. In some ways the movie reminded me of the old one-liner horror bits of the 80s because of this and, in others, it reminded me of newer films because of the effects it could afford to give me. Honestly, I was impressed.

Jennifer’s Body is filled with quirky dialogue and slang that Cody previously made famous in her hit ‘Juno’, and contains a perfect amount of horror combined with the comedy of that of a teen film. The humor in Jennifer’s Body is dark humor, similarly to 2009’s ‘Drag Me To Hell’.
Movie Quality: 9/10

The print is presented in 1080p/AVC MPEG-4 with a 1.85:1 aspect ratio. ‘Jennifer’s Body’ is rather impressive on Blu-ray offering a demo worthy image. I was amazed at the color range as it was deep and vivid really popping out off the screen. I found reds, blues, and yellows to really shine with this print. Blacks are deep. Details are excellent throughout as this is a pristine image with no apparent issues.
Video Quality: 9.5/10

The audio is presented in DTS-HD MA lossless 5.1 mix. The audio presentation for ‘Jennifer’s Body’ is a very immersible experience. There are a ton of panning and dynamic effects brought into the soundfield which will captivate the viewer in many key scenes such as the fire in the bar scene for an example. It is odd to have a film of this nature take advantage of action sequences.
Audio Quality: 9/10

‘Jennifer’s Body’ is not a film for everyone, even horror film fans have found things wrong with the presentation. I found ‘Jennifer’s Body’ to be entertaining with a few parts of the story that could have been better developed. The issue I have is that this film was given the wrong name as many thought they were going to see nude scenes of Megan Fox. I was not expecting the premise of the film to be centered around nudity and that is why I enjoyed this much more than others. On Blu-ray the film encompasses a nice video and audio transfer with near demo video presentation. I would recommend this as a rental first before considering a purchase.
Overall Rating: 9/10

« Cloudy With A Chance of Meatballs Blu-ray Review
The Secret Life of the American Teenager: Season Three DVD Review »