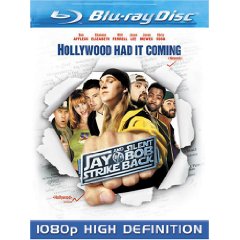 With sidesplitting dialogue and rampant profanity, Jay and Silent Bob Strike Back reunites Kevin Smith’s dynamic duo in supreme lowbrow style. It’s the fifth comedy in Smith’s celebrated New Jersey “trilogy.” Here Quick-Stop potheads Jay (Jason Mewes) and Silent Bob (Smith) wreak vengeance on Hollywood, where Miramax is making a “Bluntman & Chronic” feature inspired by J. and S.B., but without their permission. En route from Jersey to La La Land, Jay and his “hetero life mate” encounter sexy jewel thieves (including the delightful Shannon Elizabeth), a precocious orangutan, a dimwit wildlife marshal (Will Ferrell), and a nonstop parade of in-jokes, harmless (yet controversial) gay jokes, and splendid celebrity cameos. While gently biting the Miramax hand that feeds him, and paying affectionate homage to the Star Wars saga, Smith sheds all inhibitions to give Jay and Silent Bob a stellar sendoff that’s nasty, sassy, and undeniably hilarious.

The story is very much a continuation of the background situation in “Chasing Amy” where Ben Affleck and Jason Lee play two cartoonists who create a comic dynamic duo, Bluntman and Chronic, based on Jay and Silent Bob and their exploits in the movies “Clerks”, “Dogma”, “Mallrats”, and “Chasing Amy”. Many stock Smith characters and actors from these movies appears in this film, including Matt Damon appearing as himself, Jason Lee appearing as both the cartoonist and the owner of a local comics store who clues Jay and Silent Bob into the fact that Mirimax is making a movie based on the Bluntman and Chronic characters. Affleck also appears in two roles as cartoonist and himself, in a scene out of  “Good Will Hunting” which he plays with Damon, with Gus Van Sant playing himself as director of same. Chris Rock from “Dogma” plays the director of the “Bluntman and Chronic” movie. Two “Star Wars” veterans, Mark Hamil and Carrie Fisher appear in brief roles to beef up the “Star Wars” theme. Even Alanis Morrisette appears briefly as God, based on her role in “Dogma”. About a half dozen other Smith chronies also appear here and there in cameos.

Running gags abound. The interaction between Jay and Silent Bob is one long gag. The only problem with that is that Silent Bob breaks silence twice, which may be once too often. This worked better in “Dogma” where he also spoke only twice, but with only two or three words each time. Smith copies Woody in having at least three sly bits of business where the cast looks knowingly at the audience, generally with the intention of wondering why we the audience are so dim as to be watching this very silly movie.

This is a silly movie, very much in the spirit of the Marx Brothers and Woody Allen of “Take the Money and Run”. This makes the movie eminently watchable a second and third time, even before you get to the excellent Kevin Smith extras.
Movie Quality: 7/10

The print is presented in 1080p/MPEG-2 with a 2.35:1 aspect ratio. I found ‘Jay and Silent Bob’ to have the best video quality of all three films released in the Kevin Smith box set. While it is not the best presentation on Blu-ray as this is the same transfer as the release from 2006 and actually the same packaging. Colors are strong, but they are a tad bit overblown causing a few issues. Fleshtones were a bit too much on the plastic looking side especially with the use of too much red. Details are pretty good and refined while not amazing.
Video Quality: 7.5/10

The audio is presented in Uncompressed PCM 5.1 mix. Like all Kevin Smith films, this is a dialogue heavy film. Expect for a more front heavy experience. I did feel like I was being drowned out by the front speakers a bit too much. The rears speakers only get minimal usage. The rears get used mainly with the score/soundtrack as it fills the soundfield rather nicely. Dialogue is nice and clean through the center channel with no apparent issues.
Audio Quality: 7.5/10

‘Jay and Silent Bob Strikes Back’ is not that bad of a film, but is the weaker film of the entire “Jersey” saga. If you are a fan of Kevin Smith’s films you will enjoy ‘Jay and Silent Bob’ as they finally get their own film. I am disappointed to see the same MPEG-2 release from 2006 get packaged here. The video and audio is lacking albeit being stronger with this release than ‘Clerks’ and ‘Chasing Amy’.
Overall Rating: 7/10