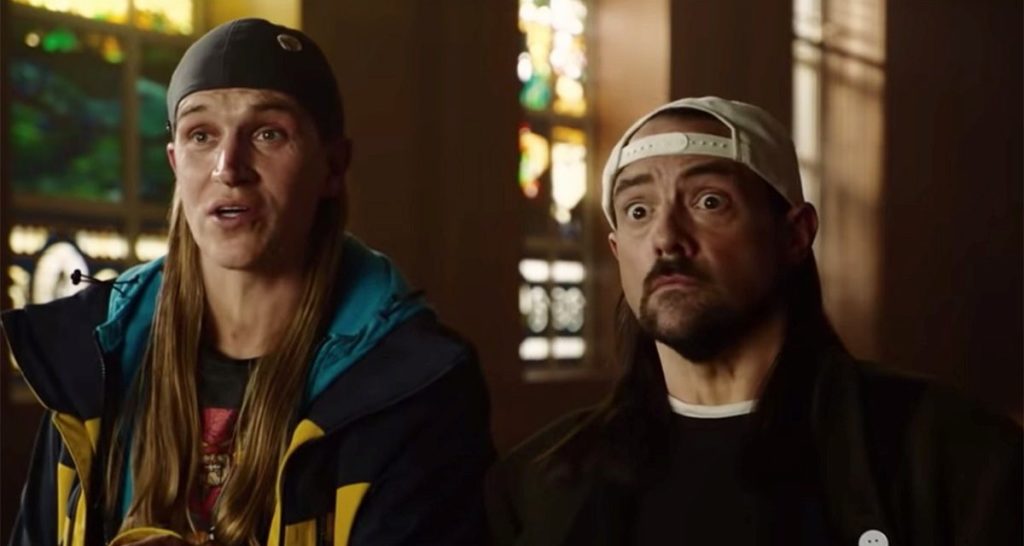 The stoner icons who first hit the screen 25 years ago in CLERKS are back. When Jay and Silent Bob discover that Hollywood is rebooting an old movie based on them, it’s game on, as the clueless duo embark on another cross-country mission to stop the madness all over again! With all-star cameos from Matt Damon, Ben Affleck, Chris Hemsworth, Rosario Dawson, Melissa Benoist, Joe Manganiello and more. 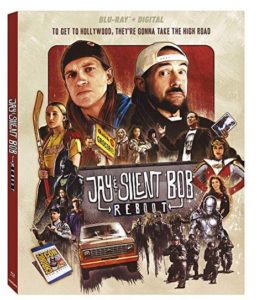 Jay and Silent Bob (Jason Mewes, Kevin Smith) must set out to Hollywood once again when they discover a new film is being made out of the old comic-book “Bluntman and Chronic,” which of course was based around them. Along the way they get into various misadventures, as Jay meets his long-lost daughter (Harley Quinn Smith) and her multi-cultural group of friends, they get into a tangle with the Ku Klux Klan, and discover they must infiltrate a massive fan-convention where a key scene from the film is being shot. Oh, and there’s cameos galore as many familiar faces from the “View Askewniverse” make appearances, often in very surprising ways.

Part of the great appeal of the film is having one more chance to catch up with the characters we love, and it is a genuine pleasure to see them again. Despite having aged quite a bit since their last outing, Mewes and Smith slip right back into the shoes of their stoner alter-egos and are as entertaining as ever. I also really enjoyed Harley Quinn Smith in a role that actually made her stretch her chops as an actress. And appearances from frequent Smith collaborators including Jason Lee, Brian O’Halloran and even Ben Affleck are welcome and help tie the film- and the series- together. I was particularly taken with Affleck’s scene, as it has quite a bit of weight given his past appearances in the View Askew universe. It all gives the film a lovely sense of nostalgia that I found quite appealing.

And while it may be subjective, I did laugh quite a bit throughout the movie. It’s definitely not one of Smith’s better-made films and it obviously suffers a low-budget, but there are some genuinely clever scenes at play. Particularly during the protracted climax set in the “Bluntman and Chronic” fan convention. I won’t spoil anything, but be prepared to laugh if you’re a longtime fan of Smith’s work, both on-screen and off. I was also really impressed by the heart of the film- Jay’s realization that he has a long-lost daughter that he wants to reconnect with. It gave the film a little extra emotional “oomph,” so-to-speak, even if it’s not always the main focus.

The print is presented in 1080p/MPEG-2 with a 2.39:1 aspect ratio. I found ‘Jay and Silent Bob’ to have the best video quality of all the films released in the Kevin Smith franchise. Colors are strong, but they are a tad bit overblown causing a few issues. Fleshtones were a bit too much on the plastic looking side especially with the use of too much red. Details are pretty good and refined while not amazing.
Video Quality: 8/10

The audio is presented in DTS-HD Master Audio 5.1. Like all Kevin Smith films, this is a dialogue heavy film. Expect for a more front heavy experience. I did feel like I was being drowned out by the front speakers a bit too much. The rears speakers only get minimal usage. The rears get used mainly with the score/soundtrack as it fills the soundfield rather nicely. Dialogue is nice and clean through the center channel with no apparent issues.
Audio Quality: 8/10

I really dug the nostalgic throwbacks to the earlier films. “Jay and Silent Bob Reboot” might not really be a good film. But it is good fun. And while your mileage may vary, that was enough for me.
Overall Rating: 7/10