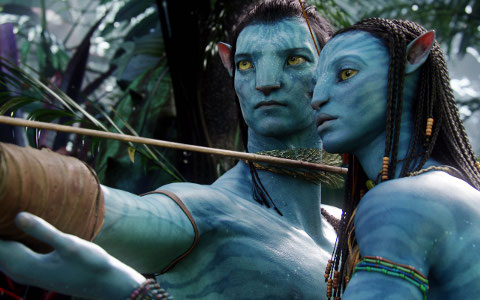 After 12 years of thinking about it (and waiting for movie technology to catch up with his visions), James Cameron followed up his unsinkable Titanic with Avatar, a sci-fi epic meant to trump all previous sci-fi epics. Set in the future on a distant planet, Avatar spins a simple little parable about greedy colonizers (that would be mankind) messing up the lush tribal world of Pandora. A paraplegic Marine named Jake (Sam Worthington) acts through a 9-foot-tall avatar that allows him to roam the planet and pass as one of the Na’vi, the blue-skinned, large-eyed native people who would very much like to live their peaceful lives without the interference of the visitors. Although he’s supposed to be gathering intel for the badass general (Stephen Lang) who’d like to lay waste to the planet and its inhabitants, Jake naturally begins to take a liking to the Na’vi, especially the feisty Neytiri (Zoë Saldana, whose entire performance, recorded by Cameron’s complicated motion-capture system, exists as a digitally rendered Na’vi). The movie uses state-of-the-art 3D technology to plunge the viewer deep into Cameron’s crazy toy box of planetary ecosystems and high-tech machinery. Maybe it’s the fact that Cameron seems torn between his two loves–awesome destructive gizmos and flower-power message mongering–that makes Avatar‘s pursuit of its point ultimately uncertain. That, and the fact that Cameron’s dialogue continues to clunk badly. If you’re won over by the movie’s trippy new world, the characters will be forgivable as broad, useful archetypes rather than standard-issue stereotypes, and you might be able to overlook the unsurprising central plot. (The overextended “take that, Michael Bay” final battle sequences could tax even Cameron enthusiasts, however.) It doesn’t measure up to the hype (what could?) yet Avatar frequently hits a giddy delirium all its own. The film itself is our Pandora, a sensation-saturated universe only the movies could create. 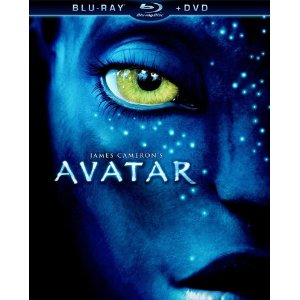 Initially concieved in 1999 as Cameron’s follow up to Titanic, Avatar was put on hold when Cameron realized the technology did not exist yet to support his vision. Over the course of the next decade, Cameron created much of the technology he needed to make this movie possible. In 2002, Cameron watched The Lord of the Rings: The Two Towers, and through the character of Gollum realized that his vision was finally possible. Twelve years have passed since the release of James Cameron’s Titanic, will his new film prove that Cameron is still “King of the World”?

Much has been made of Cameron’s Avatar long before it’s release. Hailed as a revolution in 3D and CGI technology, Avatar holds a lot of expectations, not the least of which is the fact that the budget and marketing for this film add up to approximately half a billion dollars, making it the most expensive movie ever made. Of course, Cameron has been here before. Titanic cost $200 million to make, the largest budget for a feature film at the time, and just when it looked like it was going to goose that laid the rotten egg it proceeded to make $1.8 billion worldwide, making it the highest grossing film of all time. Cameron’s also not new to the idea of revolutionizing the world of film with almost every movie he makes: with The Abyss he had the first all digital water effect, with Terminator 2 he had the first CGI character with realistic movement, and so on. Can lightning strike yet again?

With Avatar, Cameron has truly outdone himself. When District 9 came out, I raved about the CGI effects in that movie, but Avatar is a whole other monster. With Avatar you truly cannot tell where the CGI begins and reality ends and vice versa, and on top of that it is the most beautiful film I’ve ever seen, CGI or otherwise. On top of that, Cameron’s new 3D cameras create an experience that is in no way uncomfortable. No headaches and no motion sickness for those of you who suffer from that sort of thing. Instead, you get a highly immersive experience that leaves you begging for more (which is saying something, considering the film’s run time is 162 minutes) and wanting to return when you leave.

Avatar features the world of Pandora, a place that has been discovered by us Earthlings many years in the future, 2154. While our technology has advanced, we have ruined our world. While toxic, Pandora creates a lure for Earth in the form of unobtainium (yes, that made me laugh). However, another surprise is the sentient humanoid race called the Na’vi. These are giant blue human looking creatures that have tails and a special braid that allows them to connect to the world around them.

One of the humans who came to the human base on Pandora, Jake, is chosen to replace his brother as part of the Avatar program. The Avatar program is a computer generation that can put a person’s mind in the biologically created body of a Na’Vi. With this they hope to learn more about the people. Well most hope it, because of the unobtainium the main desire is to relocate the Na’Vi from their home where a great stash of it is buried, using military efforts if necessary.

Jake is chosen to go undercover for the military effort and report back on the Na’Vi weaknesses. By luck, he is separated from the Avatar group in an animal attack and saved by Neytiri a Na’Vi huntress. She brings him back to her clan where he is not killed, but instead taken in to learn how to be one of them. Over time he might change his mind about the Na’Vi home, but would he be able to convince those who desire the unobtanium, or the military power.

My only complaint about this movie is that it is a little disheartening in regards to the human race. The vast majority when you look at percentages were not good people. And even more terrible was the fact that we destroyed our Earth and had no qualms about doing it to another one with little thought to the local populace. I’d like to think that the percentage of good people would be higher in real life. As this is a movie though, I have to forgive this concept for the theatrical relevance.
Movie Content: 10/10

The print is presented in 1080p/MPEG-4 with a 1.78:1 aspect ratio. ‘Avatar’ has to be one of the most amazing looking films in high definition on Blu-ray. My jaw dropped to the floor upon initial viewing and I have watched this film now several times since release. James Cameron should be proud of himself to also top his former #1 title, Titanic. Colors are absolutely eye popping and jump off the screen like you would not believe. Blue’s and Green’s dominate the color palette throughout the entire film. Details are fantastic, especially with the CGI looking so realistic that at times I felt like I was watching a live action film. Black levels are deep in this film and stand out very nicely with the color palette used.
Video Quality: 10/10

The audio is presented in DTS-HD MA lossless 5.1 mix. If I thought the video was impressive, the audio mix is out of this world. The thundering bass stood out as one of the most positive aspects of the audio mix in my view. It was so perfect sounding, which I haven’t heard such great bass in a Blu-ray film. Then add the dynamic sounds coming from the rears in the soundfield. It was balls to the wall action in the soundfield anytime there was action. From the battle screams to bullets whizzing behind in the battlefield. Dialogue through the center channel is very clean and crisp. It sounded like pure bliss to my ears.
Audio Quality: 9.5/10

This release is for people who love the movie, end of story. If you love the movie, you’ll appreciate having such a wonderful, flawless transfer. Don’t walk, run to the store to purchase.
Overall Rating: 9.5/10