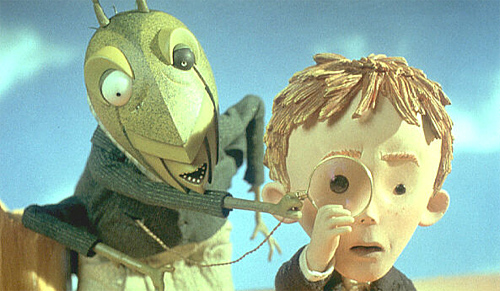 In an all-new digitally restored special edition from Tim Burton, the acclaimed director of Alice In Wonderland, comes the astounding film that captured the hearts of fans and critics all across the world.  Inspired by Roald Dahl’s beloved children’s book, Burton, Denise Di Novi and director Henry Selick combine a fascinating mix of live-action, stop-motion animation and computer-generated special effects to create a world beyond your imagination in this new Special Edition DVD.

After the daring rescue of a spider, a young boy named James finds gains possession of some magic crocodile tongues.  When James spills them in the garden, out sprouts an enormous peach!  Climbing inside, he meets an astonishing cast of characters and embarks on a magical odyssey full of thrills and adventure.  Voiced by an all-star cast, including legendary actors Richard Dreyfuss, Susan Sarandon, Simon Callow and  Jane Leeves, and featuring the celebrated music of Randy Newman, this classic story is delicious entertainment for the whole family! 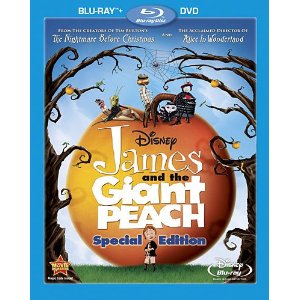 This movie takes us deep into the imagination of Roald Dahl (the author of the original story) and it is quite a trip. It’s a story about James, a boy 8 or 9 years old, who, by a strange occurrence, finds himself orphaned and in the care of (prisoner of actually) his two evil aunts. James’ life is one of toil and suffering, but he holds onto his dreams and manages the best he can.

One day James encounters an odd gentleman who gives him some magic glowing worms. These magic worms cause three things to happen: 1) A tree long thought to be barren produces a single peach that grows to an enormous size 2) Six bugs (a centipede, a grasshopper, a spider, a ladybug, an earthworm, and a glow worm (no relation to the magic worms)) grow to human size and are given the ability to speak, and 3)James is transformed into an animated version of himself.

James crawls into the middle of the giant peach, where he meets the six bugs, and they all become friends. This intrepid group then uses the giant peach as a vessel … first as a boat, then as a plane … to escape from James’ wicked aunts and then to travel to New York City (across the ocean from England) to fulfill James’ dream of seeing the Empire State Building.

Quite a story … with no lack of imagination, that is for certain. But what “James and the Giant Peach” really has working for it is the decency of the character James. He remains upbeat and hopeful despite his difficult circumstances, and this holds the movie together and keeps it on course. The bugs are all right … they’re helpful and fun … but they’re always arguing with each other. The bad guys of the movie, the two evil aunts, are pretty bad. They look like ghouls and they act like sadists. It is a very dreary situation indeed until our little hero manages to escape from their clutches.

I guess this could be called a musical, as there is some singing (of songs written by Randy Newman) and the songs are pretty good. The animation is computerized and it is top-notch. The actors and actresses who provide the voices for the bugs do an excellent job, and, like I mentioned already, there is no shortage of imagination (that is used) throughout the picture. The final scene (in NYC) is carried out exceptionally well, and the ending is a happy one.
Movie Quality: 9/10

The print is presented in 1080p/VC-1 with a 1.66:1 aspect ratio. The print is presented in 1080p/AVC MPEG-4 with a 1.66:1 aspect ratio. This has to be one of the most vivid and colorful animations on Blu-ray. Due to the colors popping off of the screen, it brings out the details in the animation. Tim Burton’s style comes off looking great visually and the atmosphere really pulls in the viewer.  This has to be one of the cleanest and most pristine animated films that I have seen for a release from a few years ago..
Video Quality: 9/10

The audio is presented in DTS-HD MA lossless 5.1 mix. This mix takes advantage of the soundfield in this film. The soundtrack and sound effects can be heard coming from all around as this is one dynamic audio experience. At times animations tend to be more dialogue driven with lack of atmosphere. Dialogue is clean and center with no balance issues.
Audio Quality: 9/10

“James and the Giant Peach” is entertaining and it is fun, but it is also quite creepy (and likely scary for young children) in parts. This “dark humor” gives the movie and overall feeling that has creepiness. On Blu-ray the film has excellent video and audio quality which will not disappoint.
Overall Rating: 8/10

« TNA Hardcore Justice 2010 PPV Review
My Message to Dixie Carter Part I – How to Rebuild TNA! »