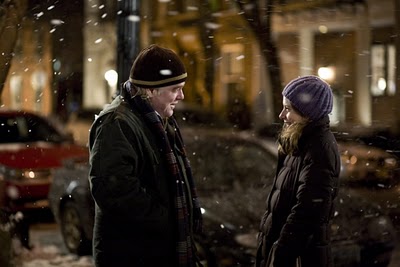 Philip Seymour Hoffman plunders social awkwardness for comic effect in Jack Goes Boating. At first, the movie seems like a sad-sack love story: Jack (Hoffman, Academy Award winner for Capote), a limo driver who likes reggae music for its positivity, gets set up with Connie (Amy Ryan, Gone Baby Gone), a trouble-magnet telemarketer, by their mutual friends Clyde (John Ortiz, Fast & Furious) and Lucy (Daphne Rubin-Vega, Wild Things). Connie inspires Jack to improve himself: he starts learning to cook and to swim (so that he and Connie can go boating in the summer to come). But as Jack and Connie take tentative, sometimes clumsy steps toward love, Clyde and Lucy’s relationship threatens to collapse from betrayal and jealousy. In the wrong hands, Jack Goes Boating would flounder in angst and sappiness. Fortunately, Hoffman and Ryan always reach for the hopeful (and often humorous) side of their characters, while Ortiz and Rubin-Vega vacillate between tenderness and unsettling bitterness. Hoffman makes his directorial debut with this movie, and his eye for telling social detail comes through as strongly as a director as it does as an actor; Jack Goes Boating‘s greatest strength is the psychological richness of its characters. 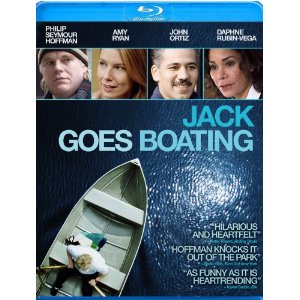 Hoffman plays Jack, a shy, unmarried man who is a limo driver for his uncle. His friend Clyde (John Ortiz) sets him up on a blind date with Connie (Amy Ryan), who works with Clyde’s wife Lucy (Daphne Rubin-Vega) at a mortuary. It is winter in New York, but Connie mentions that once summer arrives she’d like to go boating. Jack doesn’t know how to swim, so Clyde offers to help him. After Connie is attacked on a subway, Jack wants to cook for her. Jack doesn’t know how to cook.

And so you have the basic plot of Jack Goes Boating. The film is based on a play by Robert Glaudini, who adapted his play for the screen, and its stage origins are apparent throughout the film. While it’s being called a romance, a comedy, and/or a drama; I think it’s more of a dramatic character piece. Remarkably little occurs in the actual film as it’s more about what happens to the characters in the film.

With the exception of Amy Ryan, the core cast is reprising roles they originated onstage and they’re all very comfortable with these characters. Hoffman has mastered playing awkward men with no self-confidence and, as Jack you find yourself rooting for him to succeed. Ortiz does a great job as Clyde, portraying a character whose inability to forgive (or at least, forget) causes significant strain on his marriage. Ortiz taps into the psyche of the character quite well, while simultaneously being very likable. The scenes between Ortiz and Hoffman are great as they share a very convincing bond onscreen. The film’s central performances are all great in their own way and the awkward chemistry between Hoffman and Ryan makes for some great material too. You never question that Connie would fall for someone like Jack and their blossoming relationship is portrayed in a way not often seen in movies. I liked their dynamic in the way that their first date isn’t a completely awkward mess, there are no doubts about whether one likes the other, and they don’t jump directly into sex.

While I seem to recall reading that Hoffman didn’t intend to direct this film, he manages to prove his worth as a director. As an actor, he’s worked with some of the great directors so it’s hardly a surprise he learned something. He seems acutely aware that he’s directing an adaptation of a dramatic off-Broadway play and his directorial style is very simplistic, completely void of anything extravagant. There are some nice shots in the film, but if he wasn’t a well-known actor his direction wouldn’t get any special notice. I doubt Hoffman wanted to direct a film in a style that would garner much attention, so while he proves to be a good director he doesn’t attempt anything innovative or unique.
Movie Content: 9/10

The print is presented in 1080p/MPEG-4 with a 2.35:1 aspect ratio. Colors are deep and well saturated throughout the entire presentation. Blacks are strong and almost inky at times. Nowhere did the image ever appear soft with such strong colors and black levels. Flesh tones were also natural. There is some subtle grain in a few scenes, but never a distraction. Blue tints look very strong as this color is used in several scenes. You will not be disappointed at all by the video quality.
Video Quality: 9/10

The audio mix is presented in DTS HD 5.1 Master Audio lossless track. The audio presentation is not as disappointing as the video portion of this film but could have used an extra bump. This film is primarily dialogue driven and there are a lot of scenes which end up sounding rather flat with lack of punch. Whenever there is dynamic sound in the soundfield it pours through the rears at a bit lower tone than expected. Same goes with the soundtrack which also causes bass management to suffer and sound more hollow. The audio could have been much better, but gets the job done.
Audio Quality: 8/10

The story itself is very slow moving and basic, but the acting of all 4 main actors are what keeps you watching the movie. This is the definition of a character driven movie, the acting in the scene where Jack burns dinner is worth watching the movie for by itself.
Overall Rating: 7/10