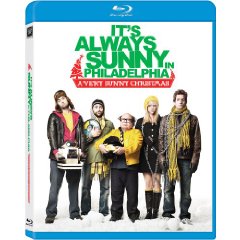 Ho, ho, heyooo! Christmas is upon us and the Paddy’s gang has got the spirit. Well, not really. For them, the holidays have always been a time of trickery, backstabbing, and disappointment. But this year things are going to be different as they are determined to rediscover the joy in Christmas. Join Mac, Charlie, Dennis, Dee and Frank as they embark on a holiday adventure filled with stolen toys, childhood videos, naked elves, and a bloody run in with Santa Claus that is guaranteed to blast Christmas spirit all over you!

“A Very Sunny Christmas” was the final episode of the fifth season of “It’s Always Sunny in Philadelphia” and in order to get past the FCC, it was released direct-to-DVD (note: this episode was longer than a standard episode and features more profanity and violence) and takes place before Christmas time.

But the night of Christmas is about each character discovering Christmas their own way and the gang trying to show Mr. Hamilton of how much Frank is an a-hole and shouldn’t be forgiven and that his business partner should demand payback.

Overall, this holiday adventure for the gang of “It’s Always Sunny in Philadelphia” definitely shows us how far the cast and crew will go when they don’t have to bend over for the FCC. It’s twisted, crazy and fun and definitely great for those who could care less for the usual Christmas specials. Many fans have come to love “It’s Always Sunny in Philadelphia” because of its writing and the fact that the main talent who are acting are the creators and writers of the show seems to help because they really have done a great job with the series thus far. So, for those who are interested in the Blu-ray or DVD release, if you are sick of the cheerful, happy holidays style of specials all over television, then you will definitely want to give “A Very Sunny Christmas” a try.
Movie Quality: 8/10

The print is presented in 1080p/AVC MPEG-4 with a 1.78:1 aspect ratio. This has to be the worst Blu-ray presentation yet as the image quality looks to pretty much be an upconverted DVD. This is a real shame that FOX would just take DVD quality print and place it on a Blu-ray, then add the BD price tag.
Video Quality: 1/10

The audio is presented in DTS-HD MA lossless 5.1 mix. This presentation is most part is a front and center-channel driven episode. The soundtrack sounds louder and cleaner but definitely not an episode where one should expect any surround or subwoofer usage.
Audio Quality: 7/10

It is nice to see this how on Blu-ray in some form, but this is not the way I had hoped for the show to make its debut even though its a direct to DVD episode. Video and audio are not what one would expect, considering that the video is DVD quality. I do not know if I could even recommend this release to hardcore fans.
Overall Rating: 5/10